China’s Defense Ministry said the 990ft Liaoning – a refitted Soviet ship purchased from Ukraine – would raise the “fighting capacity” of the Chinese navy to what it called a “modern level.” 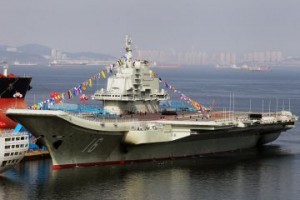 The aircraft carrier is named after China’s north-eastern Liaoning province that is home to the main naval city of Dalian, where the ship was refurbished.

According to official Xinhua news agency, Liaoning was formally handed over to the Chinese navy at the Dalian naval base, during a ceremony attended by senior Chinese leaders.

For the time being, the Liaoning will be mostly for training and testing purposes – but The Wall Street Journal reported that once it becomes operational, the ship could have a “significant influence” on regional maritime disputes.

The delivery of the vessel comes amid a tense and protracted maritime dispute with Japan over the Senkaku islands in the East China Sea, which are also claimed by Taiwan.

As GlobalPost reported this morning, the row escalated after Japanese patrol ships fired water cannons at a group of 50 Taiwanese fishing vessels that had entered Japanese waters. (GP)