<![CDATA[China has successfully landed a warplane on its first aircraft carrier. The new J-15 jet fighter touched down on the Liaoning as part of the shipâ€™s operational tests. <!--RTEditor:genereated-->The Liaoning, a refurbished Soviet-made ship, was delivered to theÂ  People’s Liberation Army (PLA) Navy on September 25 in a move that willÂ  bolster Chinaâ€™s ability to project military power. A video of theÂ  landing, broadcast by China Central Television, showed a J-15 tail hookÂ  engaging a cable on the deck of the carrier as the jet landed andÂ  slowed to a halt. China self-developed the technology for the landing,Â  which some military experts believed would not be ready until next year. “The successful landingâ€¦ has always been seen as a symbol of the operating combat capability for an aircraft carrier,” Zhang Junshe, vice director of the military’s Naval Affairs Research Institute told state television. LandingÂ  a plane on the 300-meter-long carrier was a crucial test in evaluatingÂ  the shipâ€™s combat readiness. The carrier is expected to be fullyÂ  operational in about three years. The crew performed more than 100Â  training and test programs, the Chinese Navy said, including landingsÂ  and takeoffs by at least two Chinese-made Shenyang J-15 multipurposeÂ  carrier-borne jets. Beijing bought the partially built aircraftÂ  carrier from Ukraine 10 years ago, and completed it at the port ofÂ  Dalian in China’s northeastern Liaoning province. The ship, dubbedÂ  ‘Varyag’ by the Soviet Navy, was sold off after the collapse of theÂ  USSR. 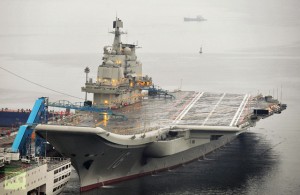 The J-15 fighter is believed to borrow design elements from the fourth-generation Sukhoi Su-33 T10K, another Chinese military purchase from Ukraine. The aircraft uses Russian-made engines, and can be armed with precision-guided bombs and both air-to-surface and air-to-air missiles. Beijing is rumored to be constructing two more independently built aircraft carriers as part of a push to modernize its military. China is building up its naval capabilities amid rising tensions with its neighbors over several territorial disputes in the East China Sea. A conflict recently escalated with Japan over a group of islands, fueling anti-Japanese riots in China and leading to declining sales of Japanese goods in the country. Chinas has also seen a rise in similar tensions with Vietnam and the Philippines. (RT News).]]>