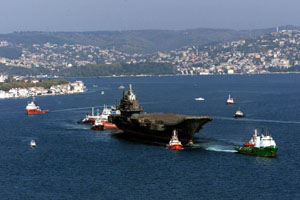 When Japanese activists scrambled ashore on a disputed island chain in the East China Sea this month, one of China’s most hawkish military commentators proposed an uncharacteristically mild response. Retired Major General Luo Yuan suggested naming China’s new aircraft carrier Diaoyu, after the Diaoyu islands in the East China Sea. It would demonstrate China’s sovereignty over the islands known as the Senkakus in Japanese, he said. For a notable hardliner, it was one of the least bellicose reactions he has advocated throughout a series of territorial rows that have soured China’s ties with its neighbours in recent months. More typical was General Luo’s warning in April that the Chinese navy would â€œstrike hardâ€ if provoked during a dispute with the Philippines over Scarborough Shoal in the South China Sea. One possible reason for General Luo’s restraint, military analysts say, is he knows it could be towards the end of the decade before China can actually deploy the new carrier to the disputed islands or any other trouble spot. Despite public anticipation in China that the carrier — a refitted, Soviet-era vessel bought from Ukraine — will soon become the flagship of a powerful navy, defence experts say it lacks the strike aircraft, weapons, electronics, training and logistical support it needs to become a fighting warship. â€œThere is considerable uncertainty involved, but it could take anything from three to five years,â€ said Carlo Kopp, the Melbourne, Australia based co-founder of Air Power Australia, an independent military think tank. SEA TRIALS The refitted carrier, commonly known by its original name, Varyag, returned to Dalian in northeast China last month after its ninth sea trial, according to reports in the official Chinese media. Some Chinese military researchers had speculated earlier that it would be commissioned into the navy this year. However, senior People’s Liberation Army officers have played down these expectations, making it clear the 60,000-tonne carrier was far from operational readiness and would undergo an extensive schedule of trials and exercises. â€œThe Great Wall wasn’t built in a day,â€ Colonel Lin Bai from the General Armaments Department, was quoted as saying on official government news websites after the Varyag returned to port. Even when the Varyag is operational, it will only have a limited operational role, mostly for training and evaluation ahead of the anticipated launch of China’s first domestically built carriers after 2015, military analysts say. Reports in unofficial Chinese military blogs and websites say China planned to build these carriers at Jiangnan Shipyard’s Chanxing Island shipbuilding base near Shanghai. However, professional and amateur analysts who study satellite images of Chinese shipyards have been unable to find any evidence of construction. In its annual report on the Chinese military published earlier this year, the Pentagon said construction may have started on some components of the indigenous carriers. SYMBOL OF BUILD-UP While an effective carrier may be years away, the program has become a symbol of China’s three-decade long build-up that has seen a sprawling land-based force with largely obsolete weapons transformed into a trimmed down, better trained military with modern warships and submarines, strike aircraft and an arsenal of precision missiles. For the Chinese navy, the addition of carriers has been a top priority as it builds a force capable of deploying far from the Chinese mainland. Senior commanders have long argued these warships would enhance Beijing’s capacity to enforce claims over Taiwan and hotly disputed territories in the South China Sea and East China Sea. Chinese military analysts have speculated the Varyag will be based at China’s new naval base at Yalong on the southern tip of Hainan Island, close to the disputed Spratley and Paracel Island groups. Carriers and their long-range strike aircraft would also enhance the PLA’s capacity to protect key sea lanes that carry China’s massive foreign trade, they say. The commissioning of complex and expensive warships has considerable domestic propaganda value for the ruling Communist Party as a demonstration that China is becoming a top-ranked naval power. The U.S. Navy’s fleet of 11 nuclear-powered aircraft carriers allow it to control vast areas of the earth’s surface and airspace. Only a handful of other nations including Britain, France, India and Russia deploy militarily effective carriers. â€œAircraft carriers are incomparable and cannot be replaced by other weapons,â€ wrote Senior Captain Li Jie, a researcher at the Chinese Naval Research Institute in an Aug.21 commentary published on websites linked to the Chinese military. â€œIf a big power wants to become a strong power, it has to develop aircraft carriers.â€ (Reuters)]]>