<![CDATA[Chinese researchers have unveiled a system that allows users to control drones with their thoughts. The technology was designed to help handicapped people, but could have ample applications in other fields as well. <!--RTEditor:genereated--> 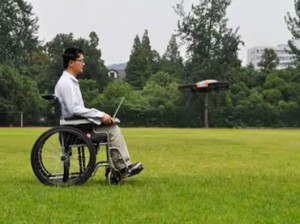 A video posted to YouTube Â by researchers at Zhejiang University shows how the system, called Flybuddy2, works. And it appears that you donâ€™t have to be a nuclear scientist to build one. All you need is an EEG headset with a Bluetooth connection to a laptop â€“ plus a quadrotor Parrot AR Drone linked to the computer. â€œThe computer can receive EEG signals via Bluetooth and convert them to specific commands to control the AR drones through WiFi,â€ a presenter explains. To get the drone to raise or to land, a user would need to â€œthink leftâ€ hard. â€œThink left lightlyâ€ if you want to rotate clockwise and â€œrightâ€ if you want it to lurch forward. Give it a lift in the air by thinking â€œpush.â€ And imagine clenching it if you want to bring it back down to earth. But moving around is not the only task it can do. Remember how they tell you to avoid blinking when taking photos? Well here itâ€™s the opposite: blinking is the command that tells the drone to photograph its environs. The video shows a man in a wheelchair using the technology to get a closer view of flowers, to take pictures and even to guide his drone through a battle with another quadrotor controlled through a handheld remote control. Needless to say, mind triumphs over matter and the hand-managed drone is hustled off the mat by its thought-controlled analog. The students hope their technology will be able to help disabled people become more interactive with the world around them, and are slated to present their invention at the ACM International Conference on Ubiquitous Computing (Ubicomp), which will be held next week in Pittsburg. While handicap assistance and gaming is one potential application for the system, only the imagination can limit the potential uses mind-controlled drones could have in the future, both for civilian and other purposes. (RT News).]]>