Chinese state media took a swipe at Hillary Clinton on Friday, saying she was either ignorant of the facts about the Asian nation’s investment in Africa or was ignoring them.

The acerbic comments from the official Xinhua news agency come after Clinton, while on an official visit to Africa, appeared to question China’s motives in the region. 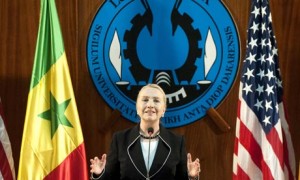 China has poured billions into Africa in recent years, emerging as the continent’s main trading partner and a major source of investment for infrastructure. But its presence has also sparked concerns regarding claims of labour abuses and corruption.

On Wednesday, in a veiled criticism of China’s role in Africa, Clinton told a university audience in Senegal that African leaders should embrace democracy and partnerships with responsible foreign powers as a means of improving their living standards and addressing the root causes of extremism on the continent.

Though she did not mention China by name, it’s clear that Africans are being asked to ponder their relationship with China.

“Whether Clinton was ignorant of the facts on the ground or chose to disregard them, her implication that China has been extracting Africa’s wealth for itself is utterly wide of the truth,” Xinhua said.

Africa has become a major source of resources for China’s economy, now the second largest in the world after the US, and trade between the two sides hit a record $166bn (£106bn) last year, a threefold increase since 2006.

Xinhua said ties with Africa were rooted in “friendship and equality” and the “friendly and mutually beneficial interaction between China and Africa gives the lie to Clinton’s insinuation”.

It said Clinton’s “cheap shots” had a hidden agenda to discredit China’s engagement with Africa and “drive a wedge between China and Africa for the US selfish gain.”

China hosted a summit with African leaders last month and pledged $20bn in credit to be used for infrastructure and other development. President Hu Jintao said China would continue to support African nations’ independent development paths, in a speech that waved off calls for China to consider human rights and other potential abuses when it made investments. (The Guardian)