<![CDATA[The attack on Jaffna University students by the Army and the Police should be vehemently denounced states the Socialist Students Union (SSU) and it calls upon all to rally against arbitrary and oppressive acts of the government. <a href="http://www.eelamenews.com/?attachment_id=106482" rel="attachment wp-att-106482"> 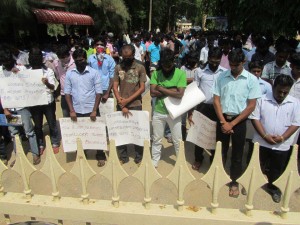 The National Organizer of SSU Dr. Nalinda Jayatissa in a press release states, “The Students Council of the Jaffna University held an agitation on the 28th against an incident where government security forces had threatened two female students of the university with firearms. The police and Army personnel that broke into during this agitation baton charged the students. Several students both male and female who were injured in the incident are still being treated in Jaffna Teaching Hospital. The government attacking peaceful agitations by students has now become a normal occurrence throughout the island. The government deployed police to baton charge, tear gas and use the water cannon against students at a peaceful agitation held in Colombo in August this year. The present incident indicates the policy of repressing the right of students for free expression is carried out by the government not only in the South but in the North as well. This is not the first attack on Jaffna University students by the police and the Army. In May 2011 Comrade Thavapalan, the General Secretary of the Students Council, was brutally assaulted near an Army check point. However, there hasn’t been any investigation carried out regarding this act. Again in May, 2012 Comrade Paramalingam, who was the General Secretary of the Students Council then, was similarly attacked but no one was arrested. Everyone knows that such attacks cannot be carried out unknown to the Army or police in Jaffna peninsula where a semi – military administration is being maintained. We, as the Socialist Students Union, vehemently condemn the savage attack by the Army and the Police on the peaceful agitation carried out by students of Jaffna University. We also call upon all to rally against the arbitrary and oppressive acts of the government.”]]>