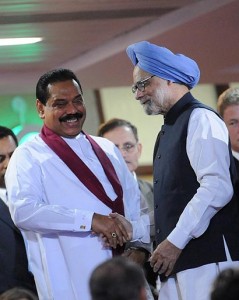 Seeking to exert pressure on the Centre, Congress MPs from Tamil Nadu today met Indian Prime Minister Manmohan Singh demanding that India join western countries like the US in bringing a resolution against Sri Lanka at the UNHRC over the alleged human rights violations during the war, the Indian media reported.

The MPs said India should join hands with the United States in bringing out a Resolution against Sri Lanka asking it to categorically implement the recommendations of its own Lessons Learnt and Reconciliation Committee (LLRC), the Press Trust of India said.

Sri Lanka has not implemented the recommendations of the LLRC despite India and other countries voting in favour of a resolution censuring the islandâ€™s government last year at the UNHRC.

â€œWe feel that India should join hands with the United States in bringing out a Resolution against Sri Lanka to categorically implement the Recommendations of its own LLRC.

â€œThis will certainly help in rendering justice to the Tamils of Sri Lanka, in addition to delegation of power in Government, conduct of free and fair elections in the Northern Province of Sri Lanka, and rehabilitation and resettlement of the displaced persons,â€ the MPs said in a memorandum.

They also said India should continuously support and work towards the welfare of the Tamils of Sri Lanka, so that they get equal opportunities and a safe and sound environment for a peaceful living.

They also thanked the Centre for notifying the Cauvery Waters Dispute Tribunalâ€™s final Award in the official Gazette of India.

â€œWe are quite sure, the publication of this notification in the Gazette would indeed bring in some respite to the people of the southern states of Kerala, Puducherry in general and Tamil Nadu in particular,â€ they said.