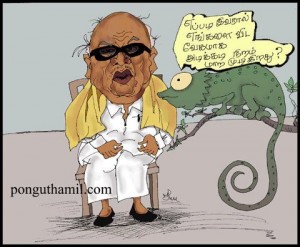 Tamil Nadu Congress Committee president B S Gnanadesikan on Sunday said the Congress and the DMK were on the same page on some of the resolutions adopted at the recent TESO meet organised by the Dravidian party. Speaking to reporters at Sathyamurthi Bhavan, he said the Congress concurred with some of the resolutions, such as equal rights for Tamils in the island nation and withdrawal of the military from the Tamil-dominated North and East of Sri Lanka. However, it was the stand of the Congress that the unity of Sri Lanka should be intact, he opined and assured that the Centre would take all steps to ensure rehabilitation of the Tamils. On the fast undertaken by BJP State leader Pon Radhakrishnan demanding benefits for poor Hindu students on par with those from minority communities, he said the BJP was trying to make it an issue as the polls were approaching. (CNN IBN)]]>