The unexpected result has sparked jubilant scenes in Croatia as people cheered and wept with joy as they watched a live broadcast of the UN court in Zagreb’s central square.

“A huge weight has been lifted off my shoulders,” said Zoran Milanovic, the Croatian Prime Minister in Zagreb. “I say thank you to them for surviving so long for the sake of Croatia.” 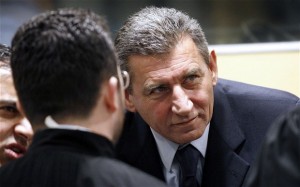 Last year’s conviction of General Gotovina for a criminal conspiracy to commit war crimes dealt a severe blow to Croatia’s image as victim of Serb aggression during the break-up of Yugoslavia.

Gen. Gotovina, and a more junior general, Mladen Markac, were acquitted on appeal by a 3-2 majority in the five judge UN appeals chamber in the most stunning reversal in the war crime court’s 18-year history.

Both men showed no emotion at the decision but their Croatian supporters in the court’s packed public gallery cheered and clapped the court ordered them to be freed immediately.

The generals were returned to their jail cells to complete release paperwork before being flown back to Croatia on Friday afternoon.

“I think right now what he wants to do is go home to his wife, his little boy, his daughter,” said Gotovina’s American lawyer, Greg Kehoe.

The two men will be driven to nearby Rotterdam airport in diplomatic limousines and flown back in a Croatian plane to a hero’s welcome in Zagreb.

The decision has angered Serbia, after the country’s former president Slobodan Milosevic died in a Dutch jail six years ago during his trial on genocide charges, many other Serbs have been convicted and imprisoned by the UN court.

Tomislav Nikolic, the Serbian President, accused the UN judges of taking a “political decision” that showed the court’s bias against Serbs and warned the release would stir up old enmities in the region.

“It is now quite clear the tribunal has made a political decision and not a legal ruling. Today’s ruling will not contribute to the stabilisation of the situation in the region and will open old wounds,” he said.

“If we had reasons to believe that the tribunal is neutral, fair and more than a court only for Serbia and its people, these reasons are now anulled with the acquittal of war criminals.”

In Croatia, thousands of people had gathered in Zagreb’s main square to watch a live broadcast of the verdict.

Men dressed in uniform and carrying the Croatian flag held placards saying “Our generals are heroes, not criminals”. Others carried pictures of the two men with the slogan “Croatia’s honour”.

“I am very happy, we have won,” 70-year-old Anica Pecar said, tears streaming down her face as fireworks erupted around her and people waved Croatian flags.

The acquittal is a major moment as the former Yugoslav republic prepares to join the EU in July 2013, Britain and other countries had made Gen. Gotovina’s capture and trial a condition of membership.

For most Croats, Gen. Gotovina symbolises the country’s independence and the beginning of his military “Operation Storm”, for which he was convicted of war crimes, is celebrated as a public holiday called Victory Day.

In its 2011 verdict, the 56-year-old former French legionnaire, with far-Right links, was sentenced to 24 years imprisonment for war crimes and crimes against humanity charges.

He was accused of seeking the “permanent removal of the ethnic Serb population from the Krajina region” during the war for Croatia’s independence in 1995.

A lightning military operation commanded by Gen. Gotovina led to the recapture of Krajina, destroying one of the last pockets of Serb resistance in an area where their community had roots going back centuries.

But the UN appeals judges rejected the key premise on which the initial conviction had been based, dimissing the prosecution argument that any artillery shells that landed on Serb-inhabited towns more than 220 yards from a military target amounted to an attack on civilians.

The judges then overturned the finding of “a joint criminal enterprise whose purpose was the permanent and forcible removal of Serb civilians from the Krajina region”.

“This has gone on for 17 years, and two innocent people can go home. But that doesn’t mean the war wasn’t bloody and Croatia will do its part to achieve justice,” said Mr Milanovic, the Croatian leader.

“Clearly mistakes were made during the course of the conflict. Mistakes for which the Croatian state should be held responsible, not Gotovina and Markac. For those wronged by the state of Croatia, Croatia will settle its debts. We should not forget in this moment that these cases also exist.”

Gen Gotovina is regarded as a national liberator in Croatia and he became a popular folk hero after successfully dodging an international manhunt for four years before his capture in 2005.

Serbia, which has handed Bosnian Serb leaders Radovan Karadzic and General Ratko Mladic over to the the court under EU pressure, warned that Belgrade’s cooperation with UN war crimes investigators might be under threat following the verdict.

“The UN war crimes court has lost all credibility,” said Rasim Ljajic, the minister responsible for the country’s cooperation with the tribunal. “Today’s decision is proof of selective justice which is worse than any injustice.”