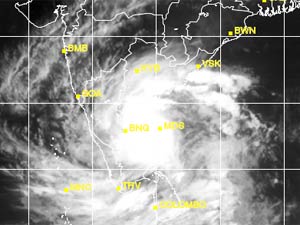 The cyclone known as “Neelam” is moving steadily away from Sri Lanka towards the northwest, but its effects are still being felt in certain regions of the Sri Lanka, the Sri Lankan Department of Meteorology said.

Heavy rainfall is expected in the coastal regions of Mannar, Jaffna, Mullaitivu, and Trincomalee, with the flow of wind being from a south by southwest direction. “These winds are flowing at a typical speed of 30-40 kmph. But these speeds will increase up to 70-80 kmph over deeper regions of the sea, especially in the northeast and east,” Karunaratne said. As a result of this, rough sea conditions are also expected.

For the 24 hour period finishing at 8:30am yesterday morning, rainfall in certain areas of the country was as follows: Jaffna- 81.8mm, Kukulegama- 76mm, Hiniduma- 69.5mm, Bandaragama- 45.8mm.

A total of 13,805 families consisting of 52,748 members have been displaced from their homes so far due to flooding.