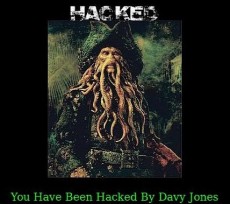 A hacker going by the name ‘Davy Jones’ claims to have hacked several government websites in Sri Lanka, the latest being the Sri Lanka Port Authority (SLPA) website. According to E Hacking News the hacker said that the websites of Rupavahini television (State TV) and Sri Lanka One had been hacked last week. While those two websites however seemed to operate without a glitch, the hacker said that the database server of those websites were breached and the database was leaked in a pastebin post. The hacker had breached the SLPA website. While the main page had not been defaced a Web page with a path to the “admin” folder was uploaded. E Hacking news also said the hacker went into the One SriLanka website and extracted all data with 1,000 e-mail IDs and passwords, in a separate pastebin post. The paste also included a mediafire download link that contains the dump comprised from One SriLanka TV Web site. Last week, Davy Jones also hacked into the Sri Lanka Bureau of Foreign Employment’s Web site, and leaked the database on a pastebin in a similar manner. Last week, the official Web site of Sri Lanka Media Center for National Security (MCNS) had also been hacked and defaced by a hacker calling himself Game Over.]]>