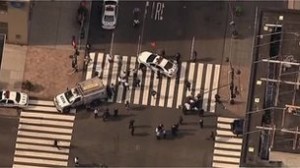 A number of people have been wounded near the Empire State Building in New York City, officials have said. The gunman was killed and up to eight others were wounded in the incident, which is reported to have taken place before 09:00 (13:00 GMT) yesterday.

It is not clear what the casualties’ conditions were, or what led to the shooting at 34th Street and Fifth Avenue.
The incident does not appear to be terror-related, police said.
There is currently a heavy police presence around the popular tourist attraction.
Fifth Avenue, a major traffic artery in the city, has been closed from 42nd street, local media said.
One witness, Aliyah Imam, told TV station Fox 5 News that the gunman was “shooting indiscriminately at people”.
She said a young woman standing next to her fell to the ground after being shot.(BBC)
]]>