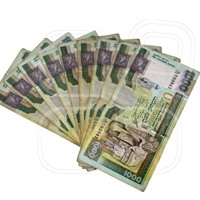 The debt service payments was expected to be US$ 954.5 million in 2011 and expected to nearly double in 2012 to an estimated US$ 1,539.4 million. The sharp increases in debt servicing costs are due to increased borrowing in recent years, especially those since 2009.

External debt servicing costs were 12.6 per cent of export earnings in 2011. It was much higher in 2010 at 15.9 per cent and 19 per cent in 2009. This is not an excessive burden, but the increasing trade deficit and poor performance in exports make it a strain on the balance of payments.

Foreign debt servicing has been sustainable owing to the large inflows of foreign remittances. When these are taken into account the external debt servicing ratio falls to much lower levels.