<![CDATA[The former Syrian foreign ministry spokesman, Jihad Makdissi, is on his way to the United States after apparently defecting, the Guardian has learned. Makdissi, the most senior Christian official yet to abandon Bashar al-Assad's regime, was reported on Monday to have variously been sacked or defected and to have arrived back in London, where he used to serve in the Syrian embassy. <a href="http://www.eelamenews.com/?attachment_id=106772" rel="attachment wp-att-106772"> 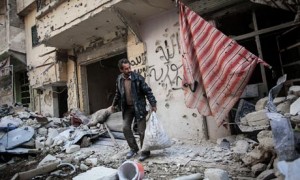 But usually reliable diplomatic sources revealed on Tuesday that he is en route for â€“ or already in â€“ the US after managing to leave the capital, Damascus, for Beirut. He was not in the UK, British officials insisted. In Washington, a state department spokesman said: “We are not in a position to confirm his actions or whereabouts.” Amid continuing violence inside Syria, state media reported that 28 children were killed when a school was hit by mortar fire at the Wafideen camp north of Damascus. In Brussels, Anders-Fogh Rasmussen, Nato secretary general, warned that any use of chemical arms by Syria would meet an “immediate” international response. Alliance foreign ministers later approved the deployment of Patriot anti-missile batteries to the Turkish-Syrian border. Makdissi himself has not made any statements but his brother Sami said on his Facebook page that an announcement would be made “shortly”. Confusingly, Sami was later quoted by a Lebanese news website, al-Nashra, as denying that Jihad had defected and claimed that his Facebook page had been hacked into. Makdissi was spokesman for Syria’s foreign ministry from shortly after the uprising against the Assad regime erupted in March 2011. Fluent in English and a communications professional, he presented the government’s version of events during visits by Arab League and UN missions and mediators, and in the wake of several massacres. When government forces were blamed for killing 103 people, including 49 children, in Houleh near Homs last May, Makdissi dismissed what he called a “tsunami of lies”. Many opposition supporters described his departure as an escape rather than a defection, since he had served the regime loyally for so long â€“ “a rat deserting a sinking ship,” said one. But others praised his patriotism and decency. Reports from Damascus said that Makdissi’s house in the Mezzeh area had been burned. Syria’s new opposition coalition did not comment on the reported defection. But Ausama Monajed, of the Syrian National Council, another anti-Assad group, said: “It is another huge blow to the regime, similar to the defection of the prime minister Riyad Hijab. Makdissi has been their mouthpiece, the person who used to legitimise their actions against the people. It tells you that regime is on its last legs. Its demise will come soon.” Syrian state media did not mention the story. But it was seized on by western governments. “If the man charged with lying to the outside world can’t stomach Assad any more it is a pretty damning indictment of the regime â€“ and a message to others who might be thinking of following suit,” one diplomat said. In the past the US has debriefed Syrian defectors â€“ including the head of its chemical arms forces â€“ but has been content to let other governments help Syrian officials flee. Washington did not want to get involved with Manaf Tlass, the army brigadier general and close Assad associate who was helped to escape by French intelligence and was backed by Saudi Arabia. Hijab was supported by Jordan and the Gulf state of Qatar. Syrian opposition sources suggested there could be a role for Makdissi and other former officials in the transitional government, which is due to be formed in Morocco next week, as long as they do not have “blood on their hands”. Western governments are urging that it include members of Syria’s minorities, especially Christians and Assad’s Alawite sect. In western capitals there is a sense that Syria’s 20-month crisis is accelerating as rebel forces pose an increasingly serious challenge to the government, especially in the Damascus area. Last week the CIA reportedly issued an assessment that Assad would fall within eight to 10 weeks. President Barack Obama warned on Monday of unspecified consequences if the regime used chemical weapons. Syria has said that it would not use them against its own people. Nato’s Anders-Fogh Rasmussen told reporters in Brussels on Tuesday: “The possible use of chemical weapons would be completely unacceptable for the whole international community and if anybody resorts to these terrible weapons I would expect an immediate reaction.” Israel, Turkey and Jordan all fear that such weapons might be used or seized by rebels and are believed to have contingency plans to seize and neutralise them. The US and Britain are also prepared to act. (The Guardian)]]>