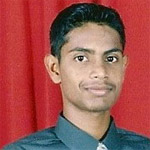 Ragihar Manoharan was one of five Sri Lankan Tamil students killed by Sri Lankan security forces in January 2006 in the city of Trincomalee.

Authorities have failed to prosecute anyone for their murder. His case is emblematic of the thousands of people subjected to human rights violations and war crimes in Sri Lanka by government forces or their paramilitary agents.

A 2006 commission of inquiry examined the murder of the five students but its report has never been made public. Call on the Sri Lankan government to release the commissionâ€™s report and to bring the killers of Ragihar Manoharan and the other four students to justice.