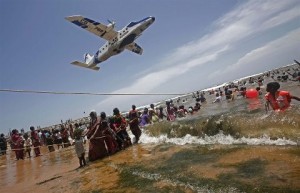 A demonstration against the Kudankulam Nuclear Power Project in South India was held in Jaffna town yesterday.

The New Democratic Marxist-Leninist Party organised the demonstration which was the first protest in Sri Lanka against the nuclear plant.

The demonstrators gathered in front of the Jaffna Bus stand and chanted slogans and held placards against the Kudankulam project.

NDMLP leader S.K. Senthilvel said that the project could pose a threat to the lives of people in Jaffna, Mannar, Puttalam and Vavuniya. He said the party would conduct more demonstrations in other districts of the north.