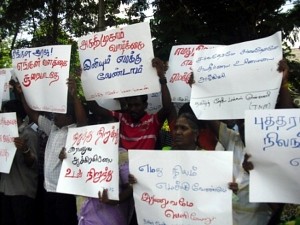 A demonstration was staged in Jaffna today against Tamil civilian land being forcibly taken by the government.

Reports from Jaffna said that the demonstration, organised by the Tamil National Peopleâ€™s Front (TNPF) lasted for several hours outside the Jaffna District Secretariat.

A huge LankanÂ police presence was seen during the demonstration agaisnt taking over civilian land in Jaffna, which was attended by the public and members of the TNPF including TNPF General Secretary Gajen Ponnambalam.

Recently there were reports that the government is to also acquire a large area of land in Vavuniya to permanently build a military camp.

According to the Lands Ministry, the owners of the land located in close proximity to the A9 highway have already been informed of this move.

The Lands Ministry says the land acquisition is being carried out legally and the owners will be compensated accordingly.