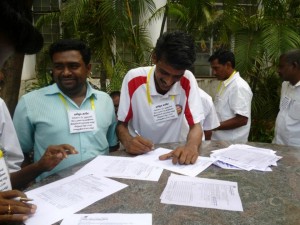 Non-Governmental Organizations (NGOs) and human rights groups have demanded the shutting down of a detention camp at Chengalpattu, Tamil Nadu where 28 Sri Lankan Tamil refugees have been lodged.

They alleged that some of these refugees in the Chengalpattu camp came to India seeking asylum 20 years ago and that cases have been registered against them for the same reason after May 2009.

The Chengalpattu refugee camp is neither functioning as a prison run in accordance with human rights laws nor as a refugee camp where rights are guaranteed. Rather, it is clear that it is functioning as an illegal detention camp. These refugees are neither treated by the International Refugee Law nor by the Indian Penal Code, the activists said.

The sole intention of this seems to be paint a picture that these men who fled their land in fear for their lives, as members of the LTTE, and thereby claim that the organisation is still operating even as the Sri Lankan government has formally announced that the LTTE has been totally wiped out, the statement added.

The members of the above organisations said that currently 13 out of the 28 refugees are on hunger strike from 15 June, demanding their immediate transfer to the open camps and that four of the protesters are in a very critical condition. (DNA)