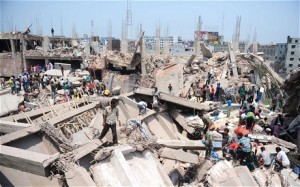 At least 113 workers were killed and hundreds more injured when an eight-storey complex, housing a factory that supplies Primark, collapsed in the Bangladeshi capital.

Survivors said that thousands of workers and residents were inside the Rana Plaza building when it collapsed, but only 600 had been rescued by the afternoon. New Wave Style, a garment factory which occupied three floors of the building in Dhaka, reported that women comprised at least half the casualties and many children were also victims. The company provided crÃ¨che facilities for the children of its female workers on the 2nd, 6th and 7th storeys.

As early as Tuesday, cracks were noticed in the structure of the building. Bangladeshâ€™s Industrial Police confirmed they had ordered the evacuation of Rana Plaza, but thousands of people nonetheless reported for work on Wednesday. Some said they returned to the factories on pain of dismissal after engineers working for the buildingâ€™s owner inspected the structure and pronounced it safe. Some workers returned to their sewing machines just an hour before the whiole complex collapsed.

Buildings in Bangladesh are often shoddy constructions, built with little regard for strength or safety.

In Wednesdayâ€™s incident, all the upper floors of Rana Plaza collapsed, leaving only the ground floor intact. Four garment factories occupied six of the eight floors. New Wave Style, the largest of the factories, lists international retailers like Benetton along with British high street names like Primark, Matalan and Bonmarche among its main buyers.

Primark confirmed that “one of its suppliers occupied the second floor” of the building. The company added that its “ethical trade team” was “working to collect information, assess which communities the workers come from, and to provide support where possible”.

Benetton denied that â€œpeople involved in the collapse of the factoryâ€ were its suppliers. A statement from Matalan said: â€œWe can confirm that New Wave has been a supplier to Matalan although we donâ€™t have any current production with them. We are deeply saddened by the news and we have been trying to get in touch with our contacts since we heard to check if we are able to assist.â€ The last time New Wave supplied Matalan was in February, a spokesman added.

Bonmarche did not respond to questions on Wednesday.

Ordinary people joined soldiers in digging for survivors in the remains of the building yesterday, some using their bare hands. Eyewitnesses said they could hear those trapped inside reciting prayers and crying out for water. Opposition leaders cancelled a one day anti-government strike in Dhaka.

Mostafizur Rahman, the director of the Industrial Police, blamed the Rana Plaza factory owners for ignoring the instruction to evacuate after the first faults were discovered on Tuesday. â€œWe had asked them to operate the factories only after a structural inspection by Bangladesh University of Engineering and Technology. But the factoriesâ€™ owners ignored our directives and decided to reopen their units on Wednesday,â€ he said.

Mohammed Sohel Rana, the buildingâ€™s owner and a local leader of the youth wing of the ruling Awami League, said the cracks had not seemed serious.

One survivor, Shaheena Akhter, 23, said that she and her colleagues had returned to work only after being threatened with dismissal. Sobbing and anxious to resume her search for missing friends, she said: â€œSome of us did not want to work fearing something might happen, but the garment factory people told us that we had to join our work otherwise we will lose our jobs. We started working and at around 9am the building collapsed. Somehow I managed to leave the building. I really am not sure how. I was inside the building and somehow I managed to get out. I canâ€™t describe it. God saved me, somehow how I managed to escape.â€

Laia Blanch from War on Want, a charity, said that international clothing brands were ultimately to blame for failing to insist that Bangladeshi suppliers used safe factories. â€œIt is dreadful that leading brands and governments continue to allow garment workers to die or suffer terrible disabling injuries in unsafe factories making clothes for western nationsâ€™ shoppers,â€ she said. â€œHow many more lives must be lost or crushed before ministers and companies act to stop these scandalous human tragedies?â€ (The Telegraph)