Over 40 people, including 12 soldiers have been killed in clashes in eastern Tajikistan, the countryâ€™s state TV says. Other reports indicate that the number of casualties in the mountainous Pamir region could be higher. 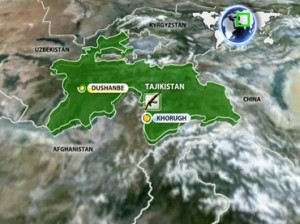 At least 23 security forces have been wounded, the countryâ€™s secret service reports. Thirteen wounded soldiers were taken to a Dushanbe hospital. One was pronounced dead.

Security forces say they have killed 30 militants and detained at least 40, and confiscated 100 weapons.

One security official said 20 soldiers had died in the fighting.

Fighting erupted in and around the eastern city of Khorugh, close to the country’s border with Afghanistan, local sources say. Some witnesses say shops and markets in the city are closed, and that there is a sense of panic amongst the population of the city. Armored vehicles have reportedly been seen roaming the streets.

The countryâ€™s security forces moved in to arrest suspects in the murder of secret services General Abdullo Nazarov.Â  The alleged criminals were linked to former guerrilla leader-turned-border patrol commander Tolib Ayombekov. Ayombekov denied the accusations, saying the general, who headed the local branch of the countryâ€™s secret services, had been killed in a drunken brawl, during which he hit his head on a rock.

AyombekovÂ  has also been accused of drug and jewelry trafficking, while his group is believed to have engaged in other criminal activities.

Militants have been surrounded by troops and have nowhere to escape, a source from the security forces told Tajik newspaper Asia-Plus.

The operation reportedly began at 4am Tuesday (Monday 23:00 GMT), after Ayombekov refused to surrender. Gunfights broke out on city streets, according to witness reports.

It is unclear exactly how many people died in the clashes. A source quoted by Russiaâ€™s Interfax new agency says nine soldiers and at least 20 guerillas were killed. The source reports no civilian casualties.

Determining the exact number of casualties presents a major difficulty, given that cell phones and landlines have been shut off in the remote mountainous province. The main highway has been closed down. No official information has been released.

â€œThe area of the operation has been cut off from the capital,â€ local journalist Galim Faiskhutdinov told RT. â€œThe highway between Dushanbe and Khorugh has been blocked since the morning. Landline and mobile communication with the region has been shut off since Sunday. Helicopters were hovering above Dushanbe in the morning. I assume they were heading to Gorno-Badakhshan.â€

The Gorno-Badakhshan Autonomous District where the clashes are takingÂ  place is dominated by the Pamiris, an ethnic minority in the centralÂ  Asian republic of Tajikistan. The area largely opposed the centralÂ  government, along with Islamists, who were backed by the Taliban andÂ  Al-Qaeda, during the Tajik Civil War in the 1990s. The war ended inÂ  1997, with the government agreeing to provide a portion of governmentÂ  seats to former rebels. Nevertheless, interethnic tensions haveÂ  persisted, and the central government has continued to experienceÂ  difficulty in maintaining its authority amongst the local population,Â  more inclined to trust former rebel commanders than officials.

TwoÂ  years ago, around 60 guerillas were killed after security forces movedÂ  into the autonomous district on the pretext of recapturing escapedÂ  convicts.

Â­In the meantime, a group of ethnic Pamiris from Gorno-Badakhshan gathered in front of the Tajik embassy in Moscow to protest the military operation. The rally was not sanctioned by city authorities, and Russian security forces have reportedly asked the protesters to leave.

â€œThere is a lot of contradictory information and we do not have any communication with the region so that we could quell our worries,â€ A protester who presented himself as Alim told RT. â€œWe strictly demand the government stops any kind of violence against the peaceful population.â€

However, an Interfax source in Dushanbe denied reports of civilian deaths, saying the operation was conducted outside the city of Khorugh, where the civilian population was much lower.