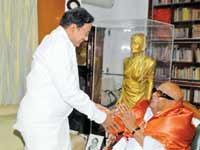 Indian union home minister P Chidambaram on Sunday reportedly conveyed to DMK chief M Karunanidhi the central government’s displeasure over a move by the ally to pass a resolution to demand Tamil Eelam at a meeting of the Tamil Eelam Supporters Organisation (TESO) in Chennai on August 12.

The TESO, which comprises supporters of Eelam (separate Tamil land in Sri Lanka) and was revived by Karunanidhi after three decades, is seen as a political strategy to boost the flagging morale of his party, which lost the 2011 assembly polls, as well as to reiterate his importance as a Tamil leader. But such a meeting, to be organised by a key ally of the UPA government, could prove a huge embarrassment for India, whose stated international policy is for cordial ties with Sri Lanka. The nearly half-anhour discussion between Chidambaram and Karunanidhi took place at the DMK chief’s CIT Colony residence in Chennai on Sunday.

The meeting comes a day after the Centre issued a notification extending the ban on LTTE.

Initially, the meeting between the two leaders was described as a courtesy call ahead of the July 19 presidential poll, DMK sources later confirmed that Chidmabaram conveyed the message that the UPA government considered it ill-advisable for the DMK leader to revive the Eelam call in the state. DMK sources said Karunanidhi, too, conveyed his unhappiness with the UPA government’s stand.

The issue has cropped up a day before a meeting of the DMK MPs and MLAs to discuss the presidential poll. “A lot of preparation and effort have gone into ensuring that the TESO meet is a success. We have sent invitations to all the major political party leaders, including those in the Congress, BJP, Left, JD(U), NCP, TMC and the Shiv Sena. Leaders like Sharad Pawar, Sharad Yadav, Omar Abdullah and Ram Vilas Paswan have indicated their keenness to participate in the conference,” said a senior DMK leader. The DMK has also invited Tamil MPs from Sri Lanka.