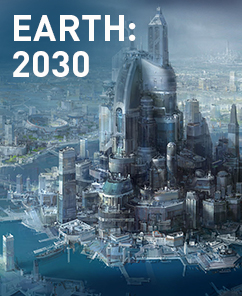 Things are about to get a little weird. This according to the National Intelligence Council, at least, a US-based coalition of spy agencies that has just released its predictions for what’s in store for the Earth in 2030. The NIC released on Monday “Global Trends 2030: Alternative Worlds,” an 140-page report that brings together the best brains within the intelligence sector to find out what we might expect a few decades down the road. Given the current rate of growth in technology and medicine, the marvels considered in the NIC report shouldn’t come as all too surprising. Only 18 years down the road, however, the ideas being pitched by the people behind the report might not be as much science fiction as soon-to-be-reality. It also might very well be predictive policy making. “We are at a critical juncture in human history, which could lead to widely contrasting futures,” Council Chairman Christopher Kojm writes in the report. With the next few years ripe for experiment, the future is “malleable,” Kojm suggests, making no time like the present to start perfecting space-age advances once thought to be out of this world. On the contrary, though, the NIC seems to think cyborg civilians and instant super-cities are thing of the not-so-distant future. “Our effort is to encourage decision-makers, whether in government or outside, to think and plan for the long term so that negative futures do not occur and positive ones have a better chance of unfolding,” the Council writes. That influence might be a bit impressive for some, though, as it includes suggestions for the world of tomorrow that will be necessary to advance them human race in order to make use of dwindling resources as populations expand around the globe. “With shale gas, the US will have sufficient natural gas to meet domestic needs and generate potential global exports for decades to come,” the report suggests in one possible outcome. As inequalities explode across the world though, the experts predict that China and the US become strong allies to tackle global issues. The “most plausible worst-case scenario,” the report adds, involves the risks of interstate conflict increasing to the point that “the US draws inward and globalization stalls.” From there, “megacities [will] flourish and take the lead in confronting global challenges.” Another possibility, the writers suggest, is as “inequalities explode as some countries become big winners and others fail. … Without completely disengaging, the U.S. is no longer the ‘global policeman’” according to the Council. No matter who is calling the shots, though, the NIC seems to think that a generation down the line will be a damn exciting time to be a human being. “People may choose to enhance their physical selves as they do with cosmetic surgery today” in 2030, they predict, at which point the replacement-limb technology is expected by the panel to be prevalent. “Future retinal eye implants could enable night vision, and neuro-enhancements could provide superior memory recall or speed of thought,” the report adds. “Brain-machine interfaces could provide ‘superhuman’ abilities, enhancing strength and speed, as well as providing functions not previously available.” And all before Justin Beiber is in his forties! (RT News)]]>