<![CDATA[A magnitude-7.3 earthquake has struck off the coast of El Salvador followed by a magnitude-5.4 aftershock, authorities said. There were no immediate reports of damage or injuries. A tsunami warning was put into effect for Costa Rica, Nicaragua, El Salvador, Honduras, Guatemala, Panama and Mexico after the quake struck at 10.37pm on Sunday. The aftershock came an hour later. The warning was later rescinded, though David Walsh, an oceanographer with the Pacific Tsunami Centre in Hawaii, said a 3.94 inch (10cm) tsunami was registered off Acajutla, El Salvador. <a href="http://www.eelamenews.com/?attachment_id=101946" rel="attachment wp-att-101946"> 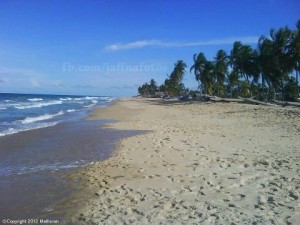 The quake was located 86 miles (138km) south-southwest of San Miguel at a depth of 33 miles, the US Geological Survey reported. The second quake registered about an hour later in the same area at a depth of 36 miles. Alfonso Lara, a technician with El Salvador’s Civil Protection agency, said authorities were alerted to the threat of a tsunami. “We are doing a general monitoring of the entire coast through our technicians and representatives,” he said. On Sunday, dozens of small to moderate earthquakes struck south-east California, knocking trailer homes off their foundations and shattering windows in a small farming town east of San Diego. The largest quake registered at a magnitude 5.5 and was centred about 3 miles north-west of the town of Brawley, according to the USGS. Another quake about an hour and a half earlier registered at magnitude 5.3. No injuries were reported. (The Guardian).]]>