Black July is a month remembered for the pogrom unleashed by the Sri Lankan government of the day against Eelam Tamils in July 1983. Though regimes have changed several times since the British left in 1948, Sri Lanka state continues to be engaged in a systematic campaign of genocide against the Eelam Tamil nation in their traditional homeland, encompassing the north and east of the island now known as Sri Lanka. While remembering the victims of the events of July 1983, Eelam Tamils will call for suspension of the Sinhala state from the Olympics and urge the international community to take necessary measures to halt the genocide. 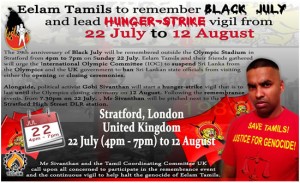 Eelam Tamils are a nation of people with their historic homeland in the north and east of the island now known as Sri Lanka. The once proud people, who as a nation exercised sovereignty over their land, have been kept in servitude since European colonial powers set foot on the island in the 16th century. After the British departed in 1948, the Eelam Tamil nation has been under the occupation of the neighbouring Sinhala nation and subjected to a protracted, systematic campaign of genocide by the ruling Sinhalese who are mired inâ€˜Mahavamsa mindsetâ€™ ideology that dictates the entire island is the sole property of the the Sinhala-Buddhists alone.

The state sponsored anti-Tamil pogroms of July 1983 that left more than 4, 000 Tamils dead was a low-point of that period on the depths to which Sri Lanka state had sunk. It was not the first instance in the crime of genocide against Eelam Tamils; as time has proven, it had not been last either: ten times as many Eelam Tamils were killed by the Sri Lankan military in a matter of weeks in May 2009; more than 147, 000 others were made to disappear in the period between September 2009 and May 2009.

The 29th anniversary of Black July will be remembered outside the Olympic Stadium in Stratford from 4pm to 7pm on Sunday, 22 July. Eelam Tamils and their friends gathered will urge the International Olympic Committee (IOC) to suspend Sri Lanka from the Olympics and the UK government to ban Sri Lankan state officials from visiting either the opening or closing ceremonies.

Alongside, political activist Gobi Sivanthan will start a hunger-strike vigil that is to last until the Olympics closing ceremony on 12 August. Following the remembrance events, from 7.30pm on 22 July, Mr Sivanthan will be pitched next to the Stratford High Street DLR station.

Mr Sivanthan has put forth five key demands to the IOC, UN and international community of states:

Mr Sivanthan and the Tamil Coordinating Committee UK call upon all concerned to participate in the remembrance event and the continuous vigil to help halt the genocide of Eelam Tamils.