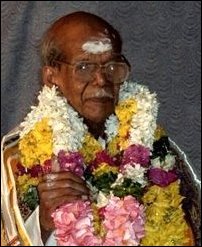 Pulavar Parvathinathasivam, poet, journalist, author and Tamil scholar passed away in Jaffna on Tuesday morning at the age of 77. Coming from an illustrious family of Tamil scholars in Jaffna, Parvathi-natha-sivam was further inspired in his outlook and writings by his association with the renowned Tamil poet Bharathidasan in the late 1950s. Starting his journalistic career with Suthanthiran, he served as editor of the weekly edition of Eezhanaadu daily in Jaffna for a long time in the 1970s and 80s. Later, he worked for Uthayan in the 90s and also contributed to Murasoli, Sanjeevi and Thinakkural. The funeral ceremonies will take place at his familyâ€™s present residence at Nanthaavil Lane in Kokkuvil on Wednesday. His ancestral house at Maaviddapuram, coming under the SL military-occupied HSZ for two decades, was released recently, but in a completely razed-down condition.

His wish during the last days was praying at the Kaa’li temple in the recently released part of the HSZ at Maaviddapuram. But, that could not be materialised.

Parvathinathasivamâ€™s father was Paâ€™ndithar M.V. Mahalingasivam and grandfather was Madduvil Kathiraivetpillai. Both were renowned Tamil scholars of their times. Coming from the Arumuga Navalar School of scholarship, his grandfather K. Vetpillai was head teacher of the Navalar School at Chidamparam for a long time.

His paternal uncle M.V. Thirugnanasampantha Pillai, who was editor of Inthu Saathanam, the Tamil edition of The Hindu Organ, in the early 20th century, wrote early Eezham Tamil short stories and novels in the name Sampanthan. His granduncle Saiva Periyar Sivapathasundaram was principal of Victoria College in the 1930s and was one of the leaders of the Jaffna Youth Congress, a pioneer native political movement in the whole of the island in the 1920s.

In the late 1950s he went to Annamalai University in Chidamparam, Tamil Nadu, to get his Pulavar Degree. He was a student of Dandapani Desikar, A. Chidamparanathan Chettiyar and T. P. Meenatchisundaram Pillai. It was during those four years he was a regular visitor to Bharathidasan living in Pondicheri. His Dravidian-Marxist outlook was shaped during that time.

Returning to Jaffna, Pulavar was a teacher to London BA students at Ramanathan Academy for sometime. He also taught at various schools in the island, and for a while worked at the Embassy of the People’s Republic of China in Colombo, before taking up journalism as his career.

In his journalistic career he was instrumental in bringing out the contributions of many of the academics and writers of his times to limelight and also in introducing many of them to media writing.

His own monthly magazine, Kalaik-ka’n, which he was running with much difficulty in the 1970s, made significant contributions to literary output besides introducing and grooming poets and writers who became popular later.

Many of his poetry and writings over the decades have come in print as several publications. Always in simple appearance and with childlike qualities, he contributed immensely to Eezham Tamil childrenâ€™s literature. He belongs to a generation that positively contributed to the society with a collective feeling, without expecting anything in return. The memory of his genre would sure inspire generations to come.

Pulavar Parvathinathasivam is survived by daughter Bharathi in Canada and sons Mahalingasivam, Ilango and Balamurali who now carry the familyâ€™s flame of teaching and Tamil studies in Jaffna. (Tamilnet)