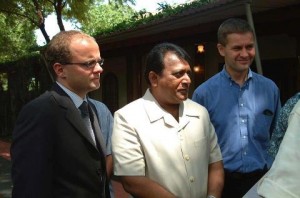 Former Norwegian minister Erik Solheim tried to sell stories that the LTTE leadership was responsible for the Muâ€™lâ€™livaaykkaal massacre at the book launch event of Frances Harrisonâ€™s â€˜Still Counting the Deadâ€™ at London on Friday, solidarity activists and members from Eezham Tamil diaspora in the audience criticized his role as a failed peace-broker and the unjust role of the UN and the International Community of Establishments in leading to the genocidal massacre of the Eezham Tamils in May 2009.

Due to the current situation, the Eelam-e-News republished our previous article for our readers:

Norway has released a fabricated report about the Sri Lankan peace process on last week, but the Norway played a big role to destabilise the Tamils military forces by huge pressure on the LTTE not the Sri Lankan government side. Therefore Norway government should take full responsibility for the genocide, Mr Parani Krihnarajani, feminist and psychological analyst told to the Eelam-e-News.

Here is the full text of his comment about the Norwayâ€™s report:

People who were supported to the Sri Lankaâ€™s genocide war, now trying to publish a post-mortem report of the Mullivaikal massacre. Not only the Norwayâ€™s report but also the UN report too.

It is clear that the report is a whitewash for the genocide elements and their allies. They are trying to hide their involvement in that massacre. Wanni massacre was not a sudden accident it was a pre-planed massacre, the Human right activists groups, UN officers and International media persons had been eliminated by Sri Lankan government before the mass murder.

The Sri Lankanâ€™s plan was earlier predicted by the Tamil Diaspora and some other human right groups, they appealed to the UN and international community to stop the massacre and put a pressure on the Sri Lankan government to brought a ceasefire agreement.Â  But the UN or international community did nothing and other way around indirectly they gave green signal to that massacre.

It was a worst crime in South Asian region since the Second World War, described by the Tamil Diaspora.

To eliminate a part of the Wanni Tamils in their own land, the Sri Lankan forces committed genocide. They targeted for extinction the 300,000 Tamils living in Wanni, a group that was emblematic of the Eelam Tamils in general. Sri Lankan forces stripped all the male Tamil prisoners, elderly and young, they steal their personal belongings and identification, and deliberately and methodically killed them solely on the basis of their identity. But the UN was allowed this massacre. It was a total failure of the UN activity and the world minority people were lost their faith on UN.

Among those norms is the Genocide Convention, signed in 1948. It commits all the governments to act to prevent and punish acts of genocide, ethnic cleansing, war crimes and other crimes against humanity. In September 2005, at the UN World Summit, 150 leaders from across the globe reaffirmed that â€œresponsibility to protect,â€ using all necessary means, including, where appropriate, military force.

Despite such pledges, thousands of Tamils were continued to face attacks and forced displacement. In Wanni alone, varying estimates of 100,000 minority Tamil people have died since 2006, while UN relief agencies place the number of displaced people and others requiring relief aid at 300,000. In northern and the eastern parts, many more are also suffering and under threat.Â

After the Sri Lankan genocide the UN secretary General Ban Ki moon appointed a three-member UN panel due to the severe pressure of the international human right groups, Tamil Diaspora and medias.

Norwayâ€™s report is a fabricated document in their part. The Norway government should take full responsibility of the genocide; the Sri Lankan government did it. Geopolitical interest was behind to destroy a minority race in the island.

The former peace facilitator and Norway minister Erik Solheim has hide some things in his speech and he has released some fabricated stories it may helpful for his next move.

But Tamils have clearly understood this geopolitical drama and they are not to absorb the Erik stories without any clarification. Erik, the Co-chair member, other organisations and some individuals have to stop cheating Tamils, Tamils know that all of them have Tamilâ€™s bloods in their hands.

Some people are talking about the LTTE leader V Prabaharanâ€™s international politics and Tamils know who are creating this story. But more than three decades he is the only dedicated Tamil leader. He defeated the Indian and Sri Lankan plots against Tamils. Not only form military ability and also he is a genius in International politics as well. His final moved in Mullivaikkal was dragged the Sri Lankan government and its allies in to a Stallingrad type trap.

Now Sri Lankan government and its allies tried to create reports and commissions to defeat the Prabaharanâ€™s trap but they canâ€™t, the Norway report also part of this agenda, but it is a very weak counter offensive.

Eelam Tamils freedom fight is not only depending on Tamil National alliance shoulder, its spread to the Global Tamil forum, Tamil youth organisations and TGTE etc. So the dominating global powers cannot be drag us into a one direction for their benefits.

Our new generations and other Tamil Diaspora movements are moving towards their goal with carefully handle with international relations. They know the geopolitical agenda, but all of these new generations are brainchild of the Velluppillai Prabaharan. We do not know weather Erik knows this or not.

In Ramayana, Bharath took the Paduka of Rama and said he would rule the kingdom till Sri Rama come back after 14 years. In Mahabharatha, Eklavya embarks upon a program of self-study in the presence of a clay image of Drona. He achieves a level of skill superior to that of Arjuna. Most of the Tamils are following these ithihasa. But westerners do not know that.

So Prabaharan will live with every movement of Tamils, Tiger flag also be with them.Â

So these dominant world powers need to stop cheating the Tamils, otherwise their activities will give unhealthiest effect within Tamils and West, he added.