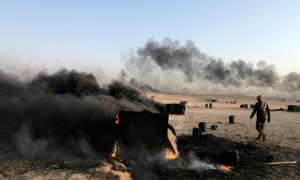 The EU decision to lift Syrian oil sanctions to aid the opposition has accelerated a scramble for control over wells and pipelines in rebel-held areas and helped consolidate the grip of jihadist groups over the country’s key resources.

Jabhat al-Nusra, affiliated with al-Qaida and other extreme Islamist groups, control the majority of the oil wells in Deir Ezzor province, displacing local Sunni tribes, sometimes by force. They have also seized control of other fields from Kurdish groups further to the north-east, in al-Hasakah governorate.

As opposition groups have turned their guns on each other in the battle over oil, water and agricultural land, military pressure on Bashar al-Assad’s government from the north and east has eased off. In some areas, al-Nusra has struck deals with government forces to allow the transfer of crude across the front lines to the Mediterranean coast.

As a result of the rush to make quick money, open-air refineries have been set up in Deir Ezzor and al-Raqqa provinces. Crude is stored in ditches and heated in metal tanks by wood fires, shrouding the region with plumes of black smoke, exposing the local population to the dangers of the thick smog and the frequent explosions at the improvised plants.

Heating oil, diesel and petrol is condensed in hoses running from the tanks through pools of water and sold across the north, as far as Aleppo. The remaining crude is shipped by road on tankers to Turkey.

The EU announced it was lifting its oil embargo in April to help the moderate opposition. The implementation regulations have yet to be issued so the decision has not taken effect, but regional experts say the announcement intensified the race for oil â€“ a race the western-backed moderates lost.

Joshua Landis, an expert on the region at the University of Oklahoma who runs the Syria Comment blog, said the EU decision on oil “sent a message that oil could come back online faster than most thought possible”.

“Whoever gets their hands on the oil, water and agriculture, holds Sunni Syria by the throat. At the moment, that’s al-Nusra,” Landis said. “Europe opening up the market for oil forced this issue. So the logical conclusion from this craziness is that Europe will be funding al-Qaida.”

Abu Albara, an al-Nusra fighter who spoke to the Guardian by telephone from Deir Ezzor, said: “Now, we can say that most of the oil wells are in the hands of the rebels, only a single oil facility in Hasakah is still under the control of [Kurdish fighters]. There are two other oil wells close to the Iraqi borders in the desert. The Iraqi army have surrounded them with tanks but we do not know what they are doing with them.”

The al-Nusra guerilla said the group was merely guarding the wells it captured, but the rival groups have accused the Islamists of asset-stripping them for quick money.

“Jabhat al-Nusra is investing in the Syrian economy to reinforce its position in Syria and Iraq. Al-Nusra fighters are selling everything that falls into their hands from wheat, archaeological relics, factory equipment, oil drilling and imaging machines, cars, spare parts and crude oil,” Abu Saif, a fighter with the Ahrar Brigade, linked to the Muslim Brotherhood, told the Guardian by phone from the Deir Ezzor area.

“The Syrian regime itself is paying more than 150m Syrian lire [Â£1.4m] monthly to Jabhat al-Nusra to guarantee oil is kept pumping through two major oil pipelines in Banias and Latakia. Middlemen trusted by both sides are to facilitate the deal and transfer money to the organisation.”

A western diplomat watching the situation said: “We understand that in Deir Ezzor, it’s a bit of a mix. Al-Nusra is there and there is sometimes co-operation with the regime for practical reasons. In some areas oil products are being given to the local communities, but there are clear dangers in these kinds of open-air refineries.”

The diplomat said the EU implementation regulation for the lifting of the oil embargo would include safeguard clauses that would give the western-backed opposition, the National Coalition, the power to authorise exports. But as things stand, the coalition and its allies hold very little of Syria’s oil wealth in their hands.

A former Syrian oil executive in the rebel-held areas said: “In the last few months, they seem to have figured a way to sell the oil supply across the lines from the rebels to government forces, through intermediaries trusted on both sides.”

The former executive said the oil trade had spawned a growing demand for oil tanker lorries, as a single shipment could earn a profit of up to $10,000 (Â£6,600). He added that al-Nusra and other jihadist groups were using much of the money to win hearts and minds in areas they have captured, such as al-Raqqa city, which fell in March.

“If you look at what the money does in these places,” he said, asking for his name not to be used because of the sensitivity of the issue. “It doesn’t take a rocket scientist. You bring in flour, you repair the bakeries, so there are big smiles in the local community. It’s an incredible marketing machine.”

In April, the head of the western-backed rebel Supreme Military Council, General Selim Idriss, pledged to create a force to secure the oilfields and other economic resources in Deir Ezzor, al-Hasakah and Raqqa provinces, but that force has yet to materialise and observers doubt Idriss has the money, manpower or weaponry to displace the jihadists.

“Idriss probably felt he had to say that, to reassure the Europeans,” Landis said. “But nobody takes such claims seriously. Where is he going to get 30,000 men from?”

The only rivals to the power of the jihadists in the oil region are the Kurds in al-Hasakah, and the Sunni tribes around Deir Ezzor, who have found themselves increasingly marginalised by Islamic extremists.

In one well-documented case, fighting broke out in the village of al-Musareb, near Deir Ezzor, between al-Nusra fighters and local tribesmen over ownership of an oil tanker. The al-Nusra commander, a Saudi called Qasura al-Jazrawi, was killed. As a reprisal, the jihadist group levelled much of the village and executed 50 of its residents.

Apart from the latest round of conflict the oil rush has triggered, human rights campaigners have raised concerns about the health impact of the wildcat refining industry. Skin and breathing complaints have become common while there are reports of workers on the improvised oil fields, including children, being burned to death in accidents.

An opposition activist in Hasakah, Salman Kurdi, said: “They refine oil by boiling it to very high temperatures by using gas cans, and most of the time, they blow up. It’s killed many of the people who work there.

“A month ago, an explosion happened in an oil well called Shadada, in the countryside south of here, and five people were killed. They dig a big hole and put lots of fire in it and gas to make it boiling. If you travel south to the countryside, you can spot the smoke rising every few kilometres.” (The Guardian)