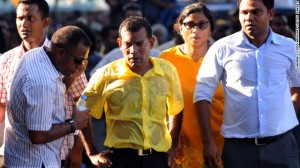 The Maldives Democratic Party (MDP) said that Nasheed was arrested and taken away by the police while he was taking part in a political rally on an island.

Earlier today the Maldivian Democratic Party, in a statement, said it was deeply disturbed and worried by the court warrant issued to arrest the Partyâ€™s Presidential Candidate and the Maldivesâ€™ first democratically elected President, Mohamed Nasheed, and produce him to a widely disputed court.