Animal faeces and oil were thrown at a protest in Mullaitivu demanding demilitarization and resettlements, reports said. 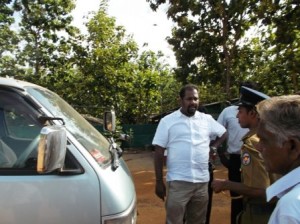 Several political parties and civil organizations had organized the agitation to press for the return of civilians’ land allegedly grabbed by the military and speeding up of resettlement of the war displaced.

The Sri Lankan military had thrown the faeces and oil mixture at the protestors, while stones were hurled at the vehicle carrying Dr. Karunaratne, reports said.

He said the vehicle was damaged in the attack that took place around 10 kms away from the protest scene.