The Black July remembrance event held at London on Sunday addressed the systematic injustice that Sri Lanka had been meting out to the Tamils, with activists placing emphasis on the protracted nature of genocide Eezham Tamils face in unitary Sri Lanka. Gobi Sivanthan, a Tamil youth activist, began his hunger-strike vigil which will end on the Olympics closing ceremony on August 12 demanding, among others, the immediate halting of land grabs in the Tamil homeland. Conveying solidarity with the demands of the demonstrators, Kurdish and British activists who spoke at the event urged the International Olympic Committee (IOC) to immediately suspend Sri Lanka from the 2012 London Olympics. “States committing genocide should not be part of Olympic games,” Akif Wan, a representative from the Kurdistan National Congress (KNK) said, speaking at the event. 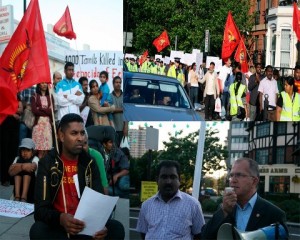 Black July commemorations are held by Tamils across the world every year to remember over 4000 Tamils who perished in a pogrom organized by the UNP regime in 1983 in Sri Lanka.

Mr. Wan, observing the parallels between the regimes in Turkey and Sri Lanka and the condition of the Kurdish and the Eezham Tamil nation, stressed that Tamils should have the right to self-determination, the choice to decide by themselves their political future.

“Furthermore, special Sri Lankan squads are chasing down former prisoners and persecuting them even further. Sri Lanka is trying to imprison the whole of Tamil society. We demand an end to all such harassment, and that the UN initiates a genuinely independent international inquiry to investigate this amongst a huge range of human rights violations taking place,” he added. 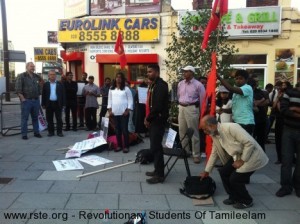 Referring to the colonization of the Tamil homeland, he said that while thousands of Tamil families are being denied the right of return, the Sri Lankan state is shipping in Sinhalese settlers onto their land.

“This is genocide. We demand an end to the colonial settlement of the Tamil homeland, and all internationally financed so called infrastructure projects facilitating the land grab,” he said, urging the International Olympic Committee (IOC) to suspend Sri Lanka from the Olympics and the UK government to ban Sri Lankan state officials from visiting either the opening or closing ceremonies. 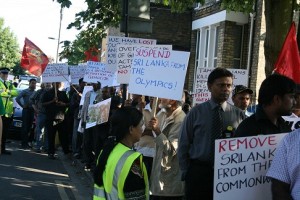 Former TNA parliamentarian Jeyanandamoorthy said that after 2009, the diaspora should continuously tell the world establishments that they will not let down the ideals of the national liberation struggle.

“The world establishments can try to stop or give false promises to divert our struggle. Eezham Tamils should not be fooled by this. After Mu’l’livaaykkaal, the diaspora are staging non-violent protests to convince the international community. If these are rejected, the methods may change,” he said.

Petitions submitted by the TCC-UK to the London Organising Committee of the Olympic Games (LOCOG), Foreign and Commonwealth Office (FCO) of UK, and the IOC demanded the barring of Sri Lanka’s participation in the London Olympics.

“The expected participation of current and previous leaders of Sri Lanka who had directly orchestrated, as agents of the state, the crime of genocide, however, stands to overshadow celebrations and raise questions about the validity of the UK’s stated commitment to the Convention on the Prevention and Punishment of the Crime of Genocide,” the petition to LOCOG and FCO read.

The event in London, organized by the Tamil Coordinating Committee-UK (TCC-UK), started as a procession from West Ham Park, culminating at the site at Stratford where Mr. Sivanthan will be carrying out his hunger-strike.

“The most important thing now is to raise attention on and to halt the genocidal land grabs in the Tamil homeland which the Sri Lankan state is systematically doing with the intention of breaking the territorial integrity of our nation,” Mr. Sivanthan told TamilNet.

A further demonstration on 27th July, the day of the opening ceremony of the London Olympics, has been planned to protest the presence of Sri Lanka at the event, organizers of Sunday’s protest said. (Tamilnet).