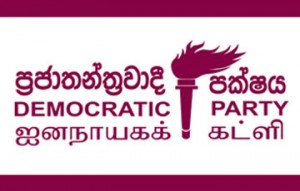 For the forthcoming Provincial Council elections , the ‘Democratic Party’ will launch an alliance  and will come forward for the lections with the ‘ flame’ as its symbol, stated Sri Lankan formar army cheif Mr. Sarath Fonseka, the Leader of the party.  He was expressing his ideas to media yesterday (12) having met the Elections Commissioner, Mr.  Mahinda Deshapriya .

Mr. Fonseka had been summoned by the Elections Commissioner to his office to  examine the  application papers  regarding registering  the  ‘ Democratic Party” as a legal political party.

But the party’s name logo has the Tamil language with error.