<![CDATA[Heavily-reported research published recently in <em>Nature Chemistry has provided the first evidence that a four-stranded form of DNA known as a ‘G-quadruplex’ exists in living human cells. 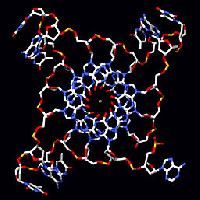 The structure is formed when guanine-rich regions of DNA form bonds between themselves that cause the double helix to fold into a square configuration. Guanine (or ‘G’) is one of the four bases from which the DNA molecule is constructed and which comprise the genetic code. The G-quadruplex structure had previously only been observed in synthetic DNA mixtures in the laboratory and within some single celled organisms. Computational analysis suggested however that it should exist in the human genome, particularly at the G-rich telomeres that ‘cap’ the ends of chromosomes and protect them from decay. The researchers set out to determine if this were the case by engineering a molecule to specifically bind to G-quadruplexes. They found the structure at many different sites in chromosomes, around a quarter of which were within telomere regions. They also showed that it occurred most frequently when the DNA within a cell is being copied, prior to division. The findings have been reported as having potential relevance for cancer research, since cancers are associated both with increased cell division and changes to telomeres that prevent cells from dying naturally after a certain number of replications. It is however a very long road from discoveries in structural chemistry to possible medical application. This work is significant for providing the first evidence that G-quadruplexes exist naturally in human cells, and for improving our structural understanding of the genome and of telomeres in particular, but it does not have any immediate implications for cancer treatment. The full text of the research paper has been made freely available on the Nature Chemistry website.]]>