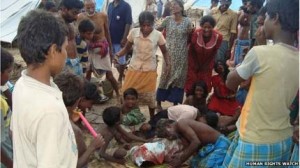 On the anniversary of the 26-year civil war, the Sri Lankan state celebrates its 2009 victory while Tamils mark the bloody nadir of the campaign to systematically dismantle the Tamil nation â€“ one which continues today.

In May 2009 as the armed conflict between the Liberation Tigers of Tamil Eelam (LTTE) and the government of Sri Lanka came to a harrowing end, Sri Lankaâ€™s genocidal offensive against the Tamil population of the North-East reached a peak. Four years on, as the Tamil nation â€“ scattered worldwide through decades of oppression and armed conflict â€“ remembers the massacre that took place, the prospect of a stable and secure future remains bleak. Sri Lanka has long proven itself both incapable and unwilling to deliver accountability and justice to the Tamil people, yet the international community too has failed to instigate a credible process towards it. But most of all, the systematic destruction of the Tamil identity continues, unchecked.

It is increasingly evident that the mantra of granting Sri Lanka time, space, economic support and international engagement is not leading to a process of accountability, reconciliation or peace for the Tamils. Torture, disappearance, rape and murder prevail; the economic and political fabric of Tamil society is repressed. What the Sri Lankan government celebrated as the defeat of one of the worldâ€™s largest â€˜terroristâ€™ organisations has not brought security to the Tamil nation.

The true extent of the destruction that took place in 2009 remains unknown. UN estimates of the numbers of Tamil civilians killed range from 40,000 to over70,000 (notwithstanding the 146,679 unaccounted for).

A panel of UN experts,citing â€˜credible allegationsâ€™ of war crimes and crimes against humanity on both sides, concluded that the vast majority of Tamil deaths were caused by government shelling. The panel accused government forces of ordering Tamil civilians into designated â€˜no-fire zonesâ€™ only to shell the areas with heavy artillery, as well as intentionally targeting hospitals. Those Tamils who survived found themselves pressed into government territory and detained in militarised camps for months afterwards. UN experts stated they were deliberately and systematically deprived of humanitarian aid, food and sanitation in these camps through the governmentâ€™s intentional deflation of numbers.

Beyond the constraints of the outdated Genocide Convention and the burden of proof of â€˜genocidal intentâ€™, to Tamils, there is no doubt that the terror unleashed upon them was genocide. The Tamil use of the term is not hyperbole; it is instead a bold stand of the Tamil nation not to shy away from expressing its self-understanding of its own lived experiences.

Crucially, only the term genocide encapsulates the sociological and political treatment of the Tamil nation by the Sri Lankan state over the past 60 years.

History makes clear that atrocities on this scale do not occur in isolation. The massacre of Tamils in 2009 came as the predictable zenith of 60 years of escalating oppression and persecution of the Tamil nation by successive governments. Previous measures such as the Citizenship Act, Sinhala Only Act, standardisation in education and the new republican constitution of 1978 were calculated to undermine the Tamil nationâ€™s place in the island and consolidate Sinhala-Buddhist hegemony. Open attacks on the nation were unleashed â€“ the crucible of Tamil history and literature as the Jaffna library was burnt, peaceful Tamil protests were violently crushed and thousands of Tamils were murdered in state sponsored pogroms. It was from this backdrop that the Tamil call for independence in 1976 and armed Tamil resistance advocating secession emerged.

Equally, the mass slaughtering of tens of thousands of Tamil civilians by the ethnically pure Sinhala military in 2009, could not have taken place without the collusion of the Sinhala majority: the competitive chauvinism of the Sinhala polity, active endorsement by large swathes of the media, complicity of the judiciary and the silent apathy of wider Sinhala society.

Whilst the absence of armed conflict has halted overt slaughter, the Sri Lankan state has escalated the dismantling of the Tamil identity in the North-East, deconstructing the very basis of the Tamil assertion of nationhood, homeland and the right to self-determination. Through the appropriation of privately owned Tamil land using dubious â€˜legalâ€™ measures and wholesale militarised seizure, the state-sponsored resettlement of Sinhala families and the establishment of militarised â€˜high security zonesâ€™, the ethnic demography of the North-East is effectively being re-engineered. Sinhala resettlement was later used as justification for a string of other measures including changing place names from Tamil to Sinhalese and erecting Buddhist stupas while Tamil places of worship such as temples and churches remain destroyed.

It is not chance that the recent accelerated land grabs come as the government, succumbing to international pressure, announced a provincial council election in the North. Though the elections serve no purpose â€“ the provincial council system cannot provide any solutions to the immediate problems of the Tamil people nor form a basis through which a political solution can be explored â€“ the government is actively working to ensure that the Tamil nation is denied control of even a vacuous body like the Provincial Council. The governmentâ€™s introduction of a carefully vetted pool of â€˜rehabilitatedâ€™ Tamil electoral candidates, its active endorsement of paramilitary parties and increasing attacks against members of the Tamil nationalist polity and press, strikes at the very heart of Tamil political power â€“ forcibly dissipating its voter base and installing fear within the electorate.

Alongside the dismantling of Tamil society and polity, the deliberate suppression of the North-East economy ensures that the character of the Tamil people as a nation, with a sustainable homeland, is meticulously erased. Sri Lankaâ€™s rhetoric of â€˜developmentâ€™ belies the state-sponsored transfer of farming lands to Sinhala farmers, curtailment of Tamil fishing opportunities and the militaryâ€™s encroachment on an array of employment sectors including transportation, housing development and tourism.

Crimes of this magnitude necessitate accountability and justice. Since 2009, the Tamil calls for an independent, international investigation, as the only means to this end, have been unanimous and unwavering. From Tamil political representatives such as the Tamil National Alliance and the Tamil National Peopleâ€™s Front, to Tamil civil society groups in the North-East and the diaspora, there is a resounding consensus: Sri Lanka must not be left to investigate itself. In over 60 years there has been no historic precedent of Sri Lanka delivering justice to Tamils for crimes committed by the state or its stooges. Emboldened by this endemic impunity, it has instead habitually stalled, producing a litany of failed reconciliation initiatives and rejecting external suggestions of improvement. Against a backdrop of intimidation, white-van abductions, and assassinations, it routinely silences anyone attempting to unearth the truth.

From the outset, Sri Lanka responded to credible allegations of war crimes and crimes against humanity with outlandish assertions: â€˜zero-civilian casualtiesâ€™ and a â€˜humanitarian rescue operationâ€™. Its rejection of international calls to investigate both sides was followed by histrionic accusations of neo-colonialists and terrorist proxies levelled against advocates of an international investigation. Sri Lankaâ€™s eventual response to pressure, the internal Lessons Learnt Reconciliation Commission (LLRC), in line with its predecessors, resolutely fails to credibly address accountability or justice. From its stated objectives (including to â€œclear the good name of the armyâ€) and formation, to the context of militarisation and intimidation in which it took place, the LLRC has proved the opposite of a credible, independent inquiry.

That it was appointed by the President to investigate crimes that he, as Commander in Chief of the Sri Lankan Armed Forces and his brother as Defence Secretary, were primarily implicated in, underscores its inconsequence. Crucially, this lack of will reverberates outside the ruling government, into the wider Sinhala polity and Sri Lankaâ€™s influential Buddhist clergy, as well as the judiciary and press. Given this, the international communityâ€™s continued calls for Sri Lanka to investigate itself reveal a dismaying lack of commitment to deliver justice to Tamils.

In the context of an ethnic conflict, a collective sense of closure is vital for any prospect of reconciliation and lasting stability to resolve deep-rooted feelings of anger, resentment and mistrust. In the case of Sri Lanka, closure could not be further away. Four years on, Tamils continue to find themselves at the mercy of those who celebrate the pinnacle of their torment as a â€˜victoryâ€™, and are actively destroying the very fabric of the Tamil identity. Anything short of an international inquiry â€“ be it â€˜truth and reconciliationâ€™ commissions or political settlements in exchange for blanket amnesties â€“ will not only continue to grant impunity and embolden an already brutal regime, but will fuel simmering resentment, and pave the way for yet more intractable conflict on the island. The suggestion that Tamils must trust in the future good will and reformed ways of todayâ€™s perpetrators and their assenters â€“ who, as numerical superiors within a unitary state, will always remain democratically unchallengeable â€“ is repulsive.

On a global level, the international communityâ€™s abysmal failure to uphold its own much-touted adage of â€˜never againâ€™ in 2009, has already inspired the macabre propagation of the â€˜Sri Lankan model of counter-terrorismâ€™. The continued failure to deliver justice for crimes such as genocide will inspire tomorrowâ€™s perpetrators worldwide.

The marking of May 18th embodies the enduring contradiction at the crux of the islandâ€™s ethnic conflict. Amidst heavy restrictions on Tamils in the North-East to exercise their right to memory, the Tamil nation comes together to remember the nadir of the genocide it has faced and that which it continues to face; the Sri Lankan state meanwhile marks its greatest victory. The images of death and suffering that form the collective Tamil memory of 2009 are irreconcilable with the images of triumphant soldiers parading their â€˜successâ€™ and a jubilant Sinhala nation waving the Sri Lankan flag.

Images of Tamil suffering and the expression of collective agony, though not in itself celebrated, have failed to provoke the collective conscience of the Sinhala nation. When Tamils took to the streets in their hundreds of thousands, to protest day and night against events unfolding, the Sinhala nation applauded the militaryâ€™s progress. What the Tamil nation mourned as the crushing of resistance against oppression was embraced by the Sinhala nation as the restoration of the natural state of Sinhala Buddhist rule across the entirety of the island.

Four years on, the contrast is no less profound. Running directly counter to Sri Lankaâ€™s determination to reject an international inquiry, is the Tamil campaign for it. As rallies that took place this May 18th and Tamil attempts at legal action against travelling Sri Lankan military officials reveal, the passing of time has only strengthened the Tamil demand for accountability and justice. Assertions that the quest for justice is being pursued only by the â€˜disconnected and radicalisedâ€™ diaspora, whilst the Tamils in the North-East only desire â€˜developmentâ€™, are evidently false. Instead, as recent prosecutions of aging Nazi criminals illustrate, the gnawing ache of injustice felt by those who faced persecution does not diminish with time. It cannot be reconciled with truth alone, and it will not be pacified by economic prosperity. Rather, only everyday security and normalcy can form the foundation on which the quest for justice can be launched. As the Tamil nation takes stock this May 18th, acutely mindful of the on-going structural genocide, the need for justice and accountability is reinforced â€“ and so too the Tamil nationâ€™s resolve to pursue it.