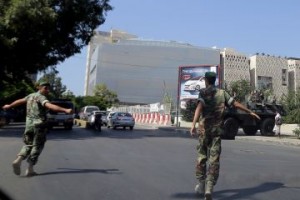 Foreign minister Laurent Fabius warned French citizens abroad to be on alert, adding that security has been stepped up outside French government buildings in several countries.

The weekly Charlie Hebdo this week added to tensions arising from the US-made Innocence of Muslims film by publishing caricatures of the Prophet Mohammed.

Today the magazine reprinted 90-thousand copies of the issue featuring the cartoons, after its first print run sold out, Agence France Presse reported.

Fabius criticized the timing if the cartoons, saying the press had a responsibility during times of high tension to not â€œfuel the fireâ€.

In Tunisia, French schools were closed on Wednesday after the ruling Islamist party denounced the cartoons as a “new attack” on the religion.

The French interior ministry says it will deny all requests for permits to protest against the film and cartoons, after a demonstration last weekend near the US embassy in Paris turned violent.

Authorities have banned a protest planned for Saturday in front of the grand mosque in Paris. (National Post)