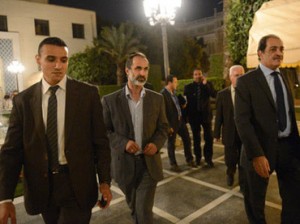 “I announce today that France recognizes the Syrian national coalition as the sole legitimate representative of the Syrian people and as the future government of a democratic Syria which will allow for an end to Bashar al-Assad’s regime,” President Hollande told a news conference in Paris.

On Sunday in Doha, Syrian opposition groups finally agreed to create a new leadership body united against President Bashar Assad. The coalition emerged after days of talks sponsored by foreign governments pushing for regime change in the embattled nation.

The US has also recognized the National Coalition of Forces of the Syrian Revolution and Opposition as “a legitimate representative” of the Syrian people but stopped short of describing it as the “sole” representative. Washington stressed that the nascent group must first demonstrate its ability to represent Syrians inside the country.

“We look forward to supporting the national coalition as it charts a course for the end of Assad’s bloody rule, and marks the start, we believe, of a peaceful, just and democratic future for the people of Syria,” US State Department spokesman Mark Toner said.

Hollande also said he would reconsider the question of arming the opposition.

“On the question of weapons deliveries, France has not supported the initiative as it has been unclear who would ultimately receive the weapons. As soon as there is a legitimate government formed by the coalition in Syria, France will once again look at this question,” he said.

France was also the first country to recognize the Libyan transitional government after the civil war which toppled Gaddafi.

The Arab League, however, has fallen short of giving full recognition. Both Iraq and Algeria have expressed reservations. The Arab League countries that have recognized the new coalition include, Saudi Arabia, the UAE, Qatar, Kuwait, Oman and Bahrain, countries which have been called a US-led ‘puppet group’ by some political commentators.

The umbrella organization, called the National Coalition for Opposition Forces and the Syrian Revolution, will be made up of rebel groups in and outside Syria.

The Syrian opposition hopes that the formation of a more unified body will attract donations from the West and the Arab League, who have both bemoaned the lack of unity among Syrian rebels.

But Franklyn Lamb, an investigative journalist based in Beirut, told RT that the agreement reached by Syrian rebels was weak and they were pushed into an agreement by western powers.

“The reason that we have this tissue paper agreement was because of all the pressure that was put on them; they had to do something,” Lamb said.

The Syrian National Council (SNC), which is the main opposition group within the National Coalition for Opposition Forces, criticized the international community for its inaction, saying that fighters were in desperate need of weapons to break the stalemate with Assad’s forces.

Until the Doha agreement the SNC had refused to fully cooperate with other groups which make up Syria’s disparate opposition but its leader George Sabra, yielded to international pressure and signed an agreement with Moaz Khatib, the leader of the new coalition, which effectively relinquished control of the SNC to the new body.

France was also the first country to recognize the Libyan transitional government, during the civil war which toppled Gaddafi. Since Gaddafi was hunted down and murdered Libya has been in chaos with the government unable to reign-in the various militias, which still control parts of the country. (RT News).