The French Embassy in Colombo has stressed on the need to pay compensations to the family members of the 17 aid workers killed in 2006, informed sources said yesterday. 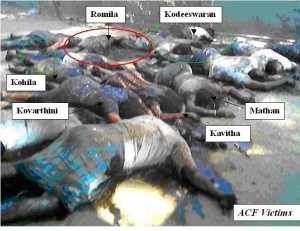 These aid workers attached to the French NGO â€˜Action Against Hungerâ€™ were killed by Sri Lankan army during the height of fighting between the Sri Lankan forces and the LTTE in Muttur. Besides, five TamilÂ students were also killed in an incident in Trincomalee the same year.

During the session of the United Nations Human Rights Council (UNHRC) in March, 2012, the government delegation agreed to reopen the cases into these two incidents and prosecute the suspects.

Meanwhile, the French Embassy in Colombo took fresh diplomatic initiatives in this case, and made inquiries from the Attorney Generalâ€™s Department on the progress into these investigations. In this exercise, French Ambassador Ms. Christine Robichon reportedly highlighted, during her meeting with the Attorney Generalâ€™s Department, the need to compensate the family members of these aid workers.

The Human Rights Watch and the Amnesty International had also raised this before many an international fora.