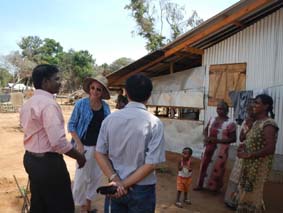 Conducting credible independent investigations on the war crimes allegations, allegations which may hamper reconciliation and poison the future of your country for generations if they are not dealt with, Christine Robichon, Ambassador of France to Sri Lanka and the Maldives, told to the Colombo media in an interview.

The LLRC report is a very constructive document, providing important recommendations to deal with the root causes of the war. I was happy to hear on last week that its Sinhalese and Tamil translations will be circulated during the coming days.

France co-sponsored the UN resolution because France wishes Sri Lanka to succeed in becoming a united, peaceful and prosperous country, where all Sri Lankan will enjoy the fruits of democracy and citizenship.

This cannot be achieved without establishing the truth about the past, neither without genuine and lasting reconciliation. The core of the resolution is about implementation of the LLRC recommendations and additional actions to ensure accountability and justice.

This second point implies conducting credible independent investigations on the war crimes allegations, allegations which may hamper reconciliation and poison the future of your country for generations if they are not dealt with. It is completely wrong to see this resolution as an attempt to isolate Sri Lanka and, as I already mentioned, France wishes to strengthen its relations with your country.

The positions taken by the 27 Members States on UN resolutions, in the General Assembly or in the Human Rights Council are not determined by binding decisions made by EU bureaucrats in Brussels. Representatives of the Member States regularly meet to share their views on the draft resolutions and to try to adopt common positions, but each country remains free to vote as it deems appropriate and the 27 are not always successful in harmonising their votes.

I would like to comment is the mention of â€œdomestic considerationsâ€, described as an important factor in the decision making process on HRC resolutions. If this suggests that the decisions made by my country regarding Sri Lanka could be influenced by the Tamil diaspora, I can assure you that the policy of France is not determined by such factors but by principles and values. We have no diaspora from Burma in France and we took very strong positions in favour of human rights and democracy in this country, she added. (Pic: France embassy).