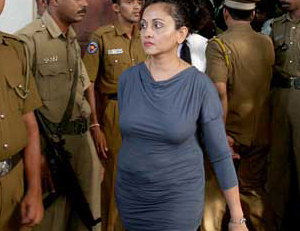 Former Editor of â€˜Sunday Leaderâ€™ Ms. Frederica Jansz who has been warranted has left to another country with her two children say reports.

She had told her associates that she would never come back to Sri Lanka.Â  With the changeover of the ownership of â€˜Sunday Leaderâ€™ Ms. Jansz was removed from the position of editor. She took over the editorship of the newspaper after the murder of Lasanthe Wickrematunga.

Ms. Jansz, who was a main witness in the â€˜white flagâ€™ case against former SLA Commander of the Army Gen. Sarath Fonseka had been given special security from the Ministry of Defense. She also received death threats due to controversial articles she published in her newspaper.

She was warranted on the 6th for not adhering to a court order that prevented her from publishing defamatory article written by her against Mr. Thilanga Sumathipala.