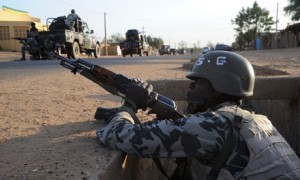 French and Malian troops have been engaged in running gun battles with Islamist militants in Gao, in clashes that have exposed gaps in security in a zone recently recaptured by a French-led military offensive.

Gunfire resounded through the streets hours after French and Malian forces reinforced a checkpoint that had been attacked for the second time in two days by a suicide bomber.

“Islamists who have infiltrated the town are trying to attack our positions, but we’re fighting back,” a Malian army officer, who wished to remain anonymous, said. Another Malian soldier said one group of rebel infiltrators had arrived on motorbikes.

Civilians crouched for cover as French and Malian troops, backed by armoured vehicles, fired on the insurgents who had entered the area.

The fast-moving military intervention launched by France last month in its former Sahel colony has driven al-Qaida-allied fighters from main northern towns such as Gao and Timbuktu into the northeast Adrar des Ifoghas mountains.

But with Mali‘s weak army unable to secure recaptured zones, and the deployment of a larger African security force slowed by kit shortages, there are fears Islamist jihadists will respond with more guerrilla raids and suicide bombings.

Abdoul Abdoulaye Sidibe, a Mali parliament deputy from Gao, said the rebel infiltrators were from the Mujwa group. “There was a whole group of them who took up positions in front of the police station and started firing in all directions. But they’re cornered by the troops now,” he said, speaking from Bamako and citing reports from witnesses in Gao.

Mujwa is a faction of al-Qaida’s AQIM wing, which, in loose alliance with the Malian Islamist group Ansar Dine, held Timbuktu and Gao for 10 months until the French offensive drove them out.

On Saturday, an army checkpoint in Gao’s northern outskirts was attacked by rebels. “Our soldiers came under heavy gunfire from jihadists from the bridge … At the same time, another one flanked round and jumped over the wall. He was able to set off his suicide belt,” Captain Sidiki Diarra said. The bomber died and one Malian soldier was wounded, he added.

Since Gao and the Unesco world heritage city of Timbuktu were recaptured last month, several Malian soldiers have been killed in landmine explosions. French and Malian officers say pockets of rebels hiding in the bush and desert between major towns pose a serious threat. “We are in a dangerous zone … we can’t be everywhere,” a French officer said.

The French, who have about 4,000 troops in Mali, have been concentrating their efforts several hundred miles north of Gao. On Friday, special forces paratroopers seized the airstrip and town of Tessalit, near the Algerian border. From here, the French, aided by some 1,000 Chadian troops in the north-east Kidal region, are expected to conduct combat patrols into the Adrar des Ifoghas mountains.

Amid the rocky gullies and caves, the remaining Islamists are believed to have hideouts and supply depots and are also thought to be holding at least seven French hostages previously seized in the Sahel.

France and its allies have called on Mali authorities to open a national reconciliation dialogue that addresses the pro-autonomy grievances of northern communities such as the Tuaregs, and to hold democratic elections.

Mali’s interim president, Dioncounda Traoré, appointed after last year’s military coup that plunged the west African state into chaos and led to the Islamist occupation of the north, said he intended to hold elections by 31 July. But he faces division within the Malian army, where rival units remain at loggerheads. (The Guadian)