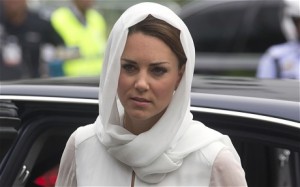 French publication Closer printed the pictures of the duchess, taken during their holiday at the French chateau of the Queen’s nephew, Lord Linley. There are four pages of pictures of William and Kate, with the duchess topless in several of them. The photos are blurry and taken with a long lens but are clearly of the royal couple, who are now touring Asia, the BBC’s Paris bureau says. They were told about the magazine’s plan to publish the photos during breakfast in Kuala Lumpur, Malaysia. Officials said the couple were â€˜saddened and disappointedâ€™ about what they considered to be a breach of their privacy. The Duke and Duchess “have been hugely saddened to learn that a French publication and a photographer have invaded their privacy in such a grotesque and totally unjustifiable manner”, a spokesman for Clarence House, the Prince of Wales’s office, said. “The incident is reminiscent of the worst excesses of the press and paparazzi during the life of Diana, Princess of Wales, and all the more upsetting to the Duke and Duchess for being so. “Their Royal Highnesses had every expectation of privacy in the remote house. It is unthinkable that anyone should take such photographs, let alone publish them. “Officials acting on behalf of their Royal Highnesses are consulting with lawyers to consider what options may be available to the Duke and Duchess.” The royals – who only last month suffered the embarrassment of pictures of a naked Prince Harry being widely disseminated – will have to decide what, if any action to take.]]>