Hundreds of French youths torched buildings and cars and clashed with police, injuring 16 officers during an overnight riot in the northern French city of Amiens.

French police reported that the clashes involved some 100 rioters and 150 officers, beginning around 9pm Monday and ending around 4am Tuesday. 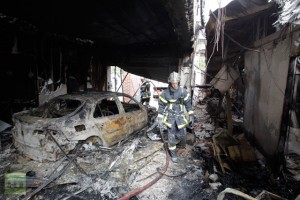 At least three bystanders were hurt after rioters pulled drivers from their cars while hijacking the vehicles, the AP reported.

One of the events that sparked the riot was an arrest made over the weekend for dangerous driving, French media reported. The arrest was seen by many locals as insensitive and unnecessarily violent, as residents were attending a wake for a 20-year-old who died in a motorcycle accident.

A leisure center and two school buildings were razed, along with a dozen cars, local officials said. Rioters used trash cans as flaming barricades, and threw heavy objects at police officers, who responded by deploying tear gas, rubber bullets and a helicopter.

Amiens has experienced riots in the past. The city is infamous for high unemployment, racial tension and an aggressive police force.

The district in Amiens was among 15 areas declared the most troubled in France earlier this month, prompting the government to pledge additional security and money for the region. Dumailly hoped tensions would improve with a plan to fix up the housing projects and offer more services, he said at the time.

In 2005, France saw its worst urban unrest in 40 years, which led to the declaration of a state of emergency by the countryâ€™s then-center-right government. Entire neighborhoods of Amiens burned for nearly a month.

The 2007 deaths of two youths hit by a police car sparked another wave of violence in the city. Unrest flared again in 2010 when police shot and killed a youth who had robbed a casino. (RT News).