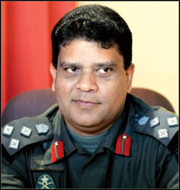 Sri Lankan Major General Shavendra Silva, the source of controversy when appointed as Deputy Permanent Representative to the UN then to Secretary General Ban Ki-moon’s Senior Advisory Group of Peacekeeping Operations, will now be leaving New York for South Africa.

Since Silva’s forces are depicted as engaged in war crimes in the UN’s own report on killings in Sri Lanka, his appearance as the Asia Group’s representative on the SAG set off a chain of events, starting with repudiation of Silva by some major Permanent Representatives in the Asia Group.

Several of them told Inner City Press they had no idea who Shavendra Silva was, and did not support him.

Even then, Ban Ki-moon did not speak or act on having Silva advising him on Peacekeeping. Then after some arm twisting, the issue was recast as the right of the Asia Group to send whomever it wanted. But had it wanted Silva? The answer seems clearly at have been no.

But still nothing from Ban Ki-moon. Inner City Press asked Ban’s head of Peacekeeping Herve Ladsous and he tellingly refused to even answer the question.

It was said that while Silva could attend, he couldn’t speak. This was not fully tested, as Silva began to be out of town when the SAG met.

Most recently Inner City Press was told by a Permanent Representative on the SAG that Silva’s name might not be on the group’s final report.Â  (It’s said Silva will remain in New York for a couple months – is it for that purpose?)

Inner City Press asked Ban’s spokesperson’s office to confirm this, but they wouldn’t.

Ironically, on October 31 Sri Lankan President Mahinda Rajapaksa publicly asked Deputy Shavendra Silva to “look for any Sri Lankans affected by Hurricane Sandy.” One wag asked, and do what to them?

Now days later comes the announcement that Shavendra Silva is being moved out, to South Africa, again as a Deputy.

Update: at Monday’s UN noon briefing Inner City Press asked Ban’s spokesman Martin Nesirky about the SAG report, and if Silva’s name will be left off it because of the controversy surrounding his involvement in the SAG.