<![CDATA[Kids in Fukushima Prefecture are becoming increasingly overweight, as they are denied daily exercise in schoolyards due to the risk posed by exposure to nuclear radiation in the area, governments’ health report reveals. <!--RTEditor:genereated-->­ 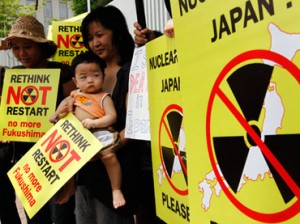 The report argues that an increasing number of kids are weighing 20 per cent more than their standard based on their height, reported Kyodo News. The study was released by the Ministry of Education, Culture, Sports, Science and Technology. Since June 2011 more than half the public institutions in Fukushima, which is just under 450 schools, have limited their outdoor activities during school hours. As of September 2012, 71 elementary and junior high schools still adhere to such restrictions, according to the prefectural education board. Their main concern is fear of exposure to radiation released from the Fukushima Daiichi complex. Earlier, alarming reports of children developing potentially cancerous abnormalities have been making news as early as July. A report by Fukushima Medical University first published this April and updated in July revealed that 36 per cent of Fukushima children have unusually overgrown thyroid glands, and could be prone to cancer. Of 38,000 children examined, 13,000 had cysts or nodules as large as five millimeters, the Health Management Survey stated, which made doctors around the globe rate Japan’s reaction to the aftermath of the Fukushima disaster as “ultimately medical irresponsibility.” On top of that, fish caught off the coast of Japan following the Fukushima nuclear disaster are still contaminated, bringing speculation that leakage from the reactors has not been fully stopped. If true, it could threaten area marine life for decades to come. The long-term consequences of the Fukushima disaster have yet to be estimated, and the possible radiation spread has been a subject of continuous dispute, with official and independent sources providing contrasting figures. Since the day of the tragedy, Japan has seen many anti-nuclear demonstrations. The Fukushima nuclear plant was hit in 2011 by a powerful earthquake and subsequent tsunami, the worst-ever disaster of its kind in Japan. The disaster triggered a strong reaction in Japan itself and from May to July Japan managed to function without nuclear power plants, but later despite widespread protests, Ōi Nuclear Power Plant was restarted. The disaster also had an awakening effect on several nations worldwide, with some deciding to shelve the use of nuclear energy, including European powerhouse Germany. (RT News).]]>