<![CDATA[Google has rejected the White Houseâ€™s request to â€œreviewâ€ the suitability of the anti-Muslim film that has sparked anti-American protests throughout the Arab world in what may have been a late attempt to defuse controversy. <!--RTEditor:genereated-->Â­ 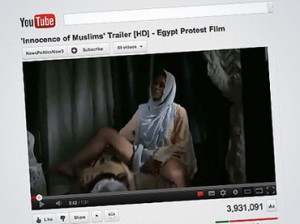 Google said it is further restricting the access to the clip on YouTube instead to comply with local laws. “We’ve restricted access to it in countries where it is illegal such as India and Indonesia, as well as in Libya and Egypt, given the very sensitive situations in these two countries,” the company said. “This approach is entirely consistent with principles we first laid out in 2007.” Earlier the Obama administration urged YouTube to â€œreviewâ€ the suitability of the anti-Muslim video. Â­â€œIt is in response to a video, a film, that we have judged to be reprehensible and disgusting,â€ said White House Press Secretary Jay Carney. â€œThat in no way justifies any violent reaction to it, but this is not a case of protest directed at the United States writ large or at US policy. This is in response to a video that is offensive â€¦ to Muslims.â€ The statement represents a turnaround from the administration as it comes to terms with the scale of protests the film has unleashed. Just a day earlier, on Thursday, Secretary of State Hillary Clinton also condemned the video, insisting that it should be allowed to be broadcast in defense of the principle of freedom of expression. Ironically titled “The Innocence of Muslims,” the 14-minute video, conceived by an American-Egyptian Coptic Christian, has been stated as a reason for attacks on US and other Western embassies and missions in over twenty Muslim countries. YouTube has not responded to the White House’s request, but had previously refused to take down the video, only selectively blocking access to it in the Middle East. â€œThis video â€” which is widely available on the web â€” is clearly within our guidelines and so will stay on YouTube. However, given the very difficult situation in Libya and Egypt we have temporarily restricted access in both countries,â€ said an earlier statement from the company, which is owned by Google. YouTube later added other countries with large Muslim populations to the blocked list. The low-budget production, which sat on YouTube for months with only a handful of views, mocks Islam and presents the prophet Mohammed as a pedophile. Various uploads of the film following its dub to Arabic and broadcast on Egyptian television have generated several million views. Some countries, such as India and Pakistan, took proactive steps and requested that YouTube block the video. Afghanistan has stopped access to YouTube in its entirety until the video portal removes “The Innocence of Muslims.” The film was initially uploaded in July, but did not cause controversy until it was dissected on conservative Egyptian programs earlier this month. (RT News).]]>