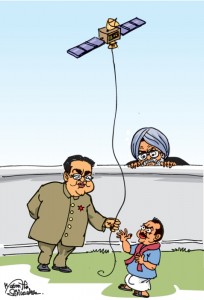 Despite defending China’s increasing presence in the Indian Ocean, Sri Lanka distanced itself from being identified as an ally, insisting that multi- million dollar funding for ports and other projects is purely a ” commercial interest”, a top official said here on Thursday. Addressing a gathering of naval delegations from 28 countries at the annual maritime conference in the southern city of Galle, Sri Lanka’s Defence Secretary Gotabaya Rajapaksa supported China’s increasing presence in the sensitive region. Admitting that there was “wariness” by India and the United States on China’s increasing presence, he nonetheless justified it on the trade and economic interests China has in the Indian Ocean. “China has an industry intensive economy that requires oil imports amounting to more than 200 million tonnes every year. Most of these oil imports are sourced from the Middle East, and then transported through the Indian Ocean to China. It is obvious that the safety and stability of the Indian Ocean is critical for China ‘s energy security, and its increasing interest and increasing naval presence in this region is quite understandable,” he said. Rajapaksa, who is also the younger brother of Sri Lanka’s president, then went on to commend China for its economic assistance to the south Asian region. However, he insisted that lumping the 360 million U.S. dollar China funded Hambantota port in the southern part of the country and the 500 million U.S. dollar Colombo harbor expansion project with China’s “string of pearls” strategy was a fallacy. “From Sri Lanka”s perspective, I wish to clarify that the Chinese investment in the Hambantota port is a purely economic one. Sri Lanka has always pursued a non-aligned foreign policy, and our only interest is in our economic development,” he insisted. Recalling the lost potential of the island during a three- decade war, Rajapaksa pointed out that after it ended in 2009, Sri Lanka reached out to many countries including China for development assistance. “We welcome assistance from anybody who is willing to give it without harsh conditions being attached. This should not be misunderstood as a form of alignment with any one country or another. In fact, there are many development projects going on in Sri Lanka that are funded by India, China, Japan, and many other countries.” Speaking to media briefly after the inauguration of the summit, the Chinese delegation said that their policy remained dedicated to peaceful engagement with countries in the Indian Ocean. (Xinhua)]]>