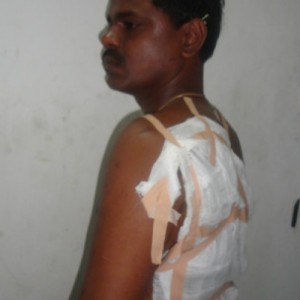 The whereabouts of assassinated UNP Jaffna DistrictÂ  parliamentarian Thiagarajah Maheswaranâ€™s brother, who was the victim of an acidÂ  attack, remained a mystery as at yesterday. Maheswaranâ€™s brother, Thiagarajah Thuwarakeswaran (47), wasÂ  attacked by Sri Lankan military with acid near the historic Nallur Kovil, where he went with his twoÂ  sons for a special â€˜poojaâ€™ on account of his elder sonâ€™s ninth birthday onÂ  Saturday, Although some reports stated that Thuwarakeswaran had beenÂ  admitted to the Jaffna General Hospital, Acting Director of the hospital Dr. SriÂ  Bawanandarajah however told that he was not admitted there. Colombo National Hospital Director Dr. Anil Jasinha said he wasÂ  not brought there. Kalubowila Hospital Director Asela Gunawardena too said noÂ  such patient had been admitted. The police, too, claimed they were not aware ofÂ  his whereabouts, but they were trying to trace the attackers. It appears thatÂ  for security reasons his whereabouts were being kept a secret. In his statement to the police, Thuwarakeswaran has said that heÂ  and his two sons, after attending the ceremony at the Nallur Kovil were walkingÂ  towards their vehicle when two men, riding a motorcycle, came near him and threwÂ  something on his back and he felt an intense burning sensation. The attackersÂ  had been wearing red helmets. The victim has also said that he was a resident of Colombo 06Â  and from there he had first gone to Karainagar and then proceeded to Point PedroÂ  for a ceremony and on Saturday morning went to Nallur Kovil with his two sons.]]>