Greens Senator for NSW Lee Rhiannon, in her Australian parliament speech about Tamils heroes day,Â says that he recent assassination in France of a French Tamil community leader is an example of the ongoing challenges that the diaspora Tamils face. Over the weekend, thousands of Tamils across France and Europe gathered in Paris to pay their respects to Mr Nadarajah, also known as Parithi, who was murdered on 8 November. It is alleged that his killing was orchestrated by Sri Lankan government officials. When investigating these crimes I trust that the French authorities will be thorough and transparent with any information that may indicate it was a political assassination. Lee’s full speech text as follows: For Tamils all around the world, including in Sri Lanka, 27 November marks a very important and hauntingly sad day. In Tamil the day is known as Maaveerar Naal. Veerar means ‘warrior’ or ‘hero’; Maa means ‘great’; and Naal means ‘day’. It is a day on which millions of Tamils will remember the hundreds and thousands of brothers, sisters, mothers, fathers, children and the elderly who sacrificed their life in the 26-year-long struggle for their freedom. Last year on this day I joined around 2,000 Tamils in Sydney’s west to pay respect to the courage, strength and sacrifice of the Tamil people. The overwhelming distress and pain of the Tamil community as they stood in line to lay down a flower in respect for the fallen was a piercing emotional experience for me. I am in parliament today so I will not be able to join the community, but I still stand beside them as their friend on this significant day. I have come to know the Tamil community in Sydney intimately and I know that their grief and feeling of betrayal by the international community, world leaders, and the United Nations is still very raw. These emotions are perpetuated by the discrimination and brutality the Tamils continue to face at the hands of the Sri Lankan government, including the sexual abuse and exploitation of women, imprisonment, land grabs, torture, assassinations and kidnappings. 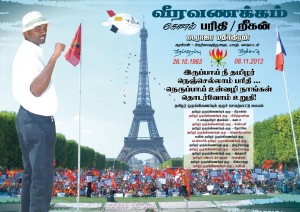