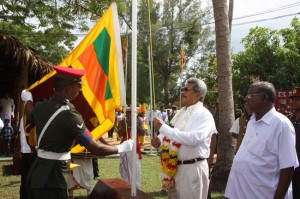 The United State’s establishment of a base in the Maldives could change the  complexion of the sub-continent region as there is likelihood of its growing interest in the region by aligning more with India; thus causing a factor which may affect Sri Lanka, Sri Lankan Defence Secretary Gotabaya Rajapaksa said yesterday.

He said this while delivering a lecture for students following the National Interest Module of the inaugural MPhil/PhD Programme of the Kotelawala Defence University.

He pointed out that it was essential to further strengthen the existing cordial relationships with powerful nations such as China and Russia, which have permanent seats on the United Nations Security Council and could influence any international action on Sri Lanka more significantly than other nations.

“Issues between India and Pakistan, and the issues between India and China are particularly sensitive in this regard. With the rise of China as a world economic leader,  there is a widespread belief that India feels insecure and is seeking to align itself with the other powers that seem similarly threatened by China’s ascendancy,” he added.