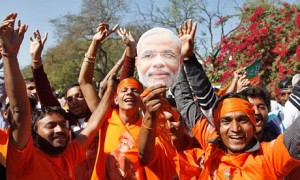 Hindu nationalists have won a resounding victory in state elections in western India, buttressing the political strength of Narendra Modi, the polarising Hindu ideologue whose supporters believe could become prime minister in 2014. With nearly all results counted on Thursday, news reports from Gujarat state, where Modi has been chief minister since 1998, gave his rightwing Bharatiya Janata party 122 seats in the 182-seat state parliament, up from 117 seats in the last election. Its closest rival, the Congress party, was expected to take 56 seats, six seats fewer than it held before. The Congress, which leads India’s national government, has seen its position dramatically weakened in recent years, its reputation battered by clumsy political manoeuvring, weak leadership and a seemingly endless stream of corruption scandals. The BJP’s top leadership has long presented Modi as a potential future prime minister. On Thursday, as supporters danced in front of party offices holding signs calling for Modi to take the country’s top position, party officials dodged questions of his role in the next national elections, expected in 2014. Modi himself, though, made clear he was thinking of the future. “No need of looking behind, FORWARD! We want infinite energy, infinite courage, infinite patience,” he tweeted. However, Modi’s past includes one of the grimmest episodes in recent Indian history, when marauding mobs of Hindus killed and burned their way through Muslim neighbourhoods in Gujarat in 2001, leaving more than 1,100 people dead. While he was never charged with a crime, his many critics say Modi did little to stop the three months of rioting. Some have accused him of encouraging the violence. Since then, Modi has been a deeply divisive figure in Indian politics, a man revered by supporters as a defender of Hinduism and reviled by opponents as an ideologue who has taken advantage of his state’s religious divide. Gujarat has become wealthy over the past decade, a magnet for companies eager for business-friendly regulations, and Modi is the most powerful man in the state. He runs nearly every major state ministry and his face is omnipresent on posters. One TV station does little but broadcast adoring reports about him. While Modi is a masterful politician, it’s unclear if he could become a national leader. His polarising history would make it difficult for a Modi-led BJP to forge the alliances it would need. “It’s not going to be that easy for the BJP to settle on Modi” as a national leader, political analyst Zoya Hasan said on NDTV television. The party “desperately needs more alliances to create a government in 2014”. His political rivals, not surprisingly, insisted Thursday’s victory did little to push him to national power, since the BJP did not dramatically increase its seats in the state parliament. “This Gujarat election proves that it’s not open skies for Narendra Modi,” Salman Khurshid, India’s external affairs minister, told reporters. Gujaratis had gone to the polls on 13 and 17 December, but the official count only took place on Thursday. (The Guardian).]]>