Over hundreds Tamils from all over Tamil Nadu took a pledge in Chennai Monday to work for peace and a nuclear-free world to commemorate the 67th anniversary of the devastation of Hiroshima and Nagasaki in atomic bomb attacks. The event was organised by May-17 movement. 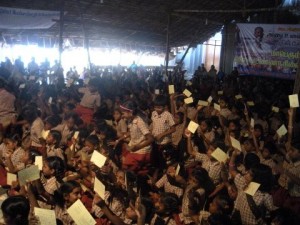 Sixty-seven years on, Japan has been remembering the victims of the worldâ€™s first atomic bomb attack.

Around 50 thousand people attended an annual ceremony in Hiroshimaâ€™s peace park, near the epicentre of the 1945 blast that destroyed most of the city and killed as many as 140 thousand people.

The anniversary comes amid growing anti-nuclear sentiment, in the wake of last yearâ€™s meltdown at the Fukushima power plant.

The accident at Fukushima, triggered by a tsunami and earthquake, has shown the dangers of nuclear technology â€“ even for peaceful purposes.

Public safety concerns in Japan have left all but two of 50 working reactors offline. 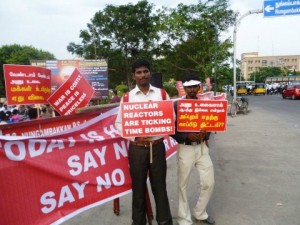